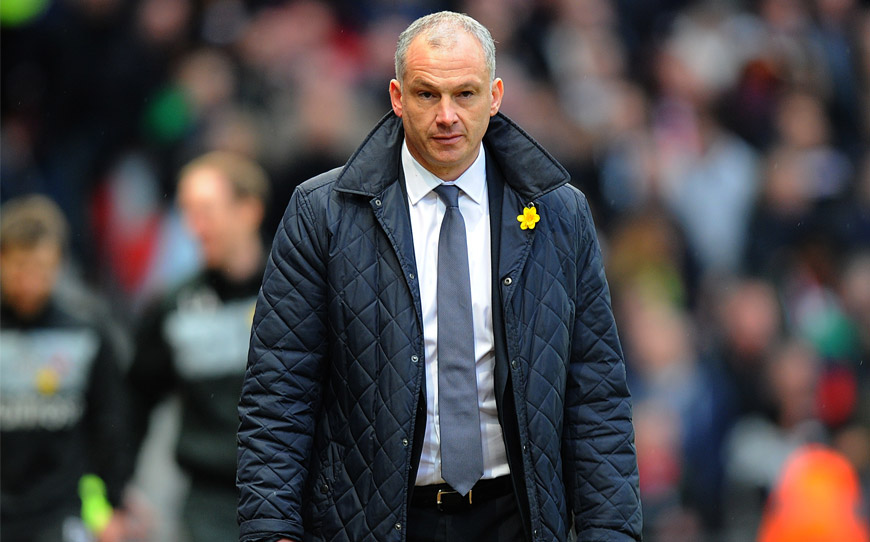 Reading have confirmed that academy manager Eamonn Dolan has died aged 48 after a battle with cancer.

Dolan underwent chemotherapy last August following an operation to remove a tumour from his bladder. His playing career, which included spells with West Ham, Birmingham and Exeter, was cut short in 1993 when he was diagnosed with testicular cancer.

He had worked for the Royals for 12 years and was appointed as caretaker manager for one match following the dismissal of Brian McDermott in 2013.

He is best known for making a considerable contribution to the club’s academy with players like Steve Sidwell, Shane Long and Jem Karacan all progressing into the

In a statement on the club’s website, Reading chairman and former owner Sir John Madejski described Dolan as “the most amazing gentleman you could wish to meet”.

He continued: “Loyal, upstanding, and his enthusiasm and devotion to me and Reading Football Club was overwhelming.”

“I know that we are all saddened by what has happened. But not many people can pass on and leave such a fantastic legacy behind.”

Those sentiments were shared by LFE chief executive Alan Sykes, who added, “Everyone at LFE is saddened by this terrible news – all our thoughts go out to Eamonn’s family at this difficult time.”

“Eamonn was a dedicated and committed football man who was proud of his work at Reading and greatly respected by all who knew him.”

Reading released a statement confirming the news that the club’s former academy manager passed away on Monday night. It reads as follows:

It is with the deepest and most profound sadness that Reading Football Club regretfully inform its supporters of the passing of Eamonn Dolan, who we tragically lost yesterday evening following a courageous battle against cancer at the age of 48.

Our sincere condolences go out to his family and many, many friends. Eamonn was, and will forever remain, one of our own.

His energy for football was infectious. His enthusiasm for the sport we all love was evident in his every compelling word he uttered. The pride in his work was enviable. And each young player who Eamonn carefully nurtured through our Academy ranks and into professional football will today stand tall as testament to one great man’s total dedication and unassuming but single-minded commitment to his job. Eamonn led by shining example. And most notably, his love for this club was overwhelming.

That love was mutual. Everyone who worked with him at Reading respected and admired a man who will be desperately missed by staff, managers, coaches and players – both past and present throughout his 12 years as a Royal.

And our supporters fully appreciated the role he played within their club’s success, the impact he had and continued to consistently make during his tenure at the helm of our Category One Academy, as well as the indelible legacy he leaves at Madejski Stadium.

Upon hearing of his renewed fight against cancer with the removal of a tumour and a course of chemotherapy that began last summer, our supporters came together in an emotional show of support for Eamonn – a spontaneous minute’s applause in the 21st minute of the opening home league match of last season representing the recent success he had enjoyed with our newly-promoted U21 team and the unequivocal support Dolan had from fans of football.

At the time, #21forDolan saw supporters stand by Eamonn’s side. Former manager Nigel Adkins took to twitter to label him ‘inspirational’ while his successor Steve Clarke used words such as ‘humble, generous and engaging’ to describe his colleague. Ex-Academy graduate Shane Long called him an ‘unsung hero’ and Jem Karacan used the word ‘influential’. Former first team stars added their voices to the growing campaign on social media, Steve Sidwell calling him ‘a gentleman’, Adam Federici describing him as his ‘mentor’ and Noel Hunt simply wishing ‘a fantastic friend’ well.

And many felt compelled to convert their support for Eamonn into pounds, raising funds in aid of charity. Some cycled to Bristol, others walked miles for a good cause, while the current squad of players came together to pose for a calendar which raised £3,000 for Royal Marsden Cancer Charity, an organisation nominated by Dolan following their incredible support during his treatment.

Dolan joined the club in 2004 and led our Academy through a golden era, a spell which saw 32 Academy players come through the ranks to make their first team debuts with Reading. He also had a big hand in first team affairs, assisting Steve Coppell, Brendan Rodgers, Brian McDermott, Nigel Adkins and Steve Clarke as well as standing in the opposite dugout to Sir Alex Ferguson when in caretaker charge of the club at Old Trafford three years ago.

Throughout, Eamonn has been the model professional and the closest of allies. For a man so modest, working tirelessly and with a real zest for success but without the desire for recognition for his countless achievements or any sort of limelight, to make such a monumental impact on a club and its supporters is extremely rare. Human beings like Eamonn Dolan are rare.

Eamonn was one of the good guys. He will be so sorely missed by so many. We will never forget him.

Reading Football Club have opened a book of condolence in honour of Eamonn Dolan. We would like to invite our supporters to visit the main reception at Madejski Stadium to leave personal messages, recalling and recording their memories of Eamonn. The book is open now and will remain open until we host our first home league match of the new 2016-17 season. Thank you.