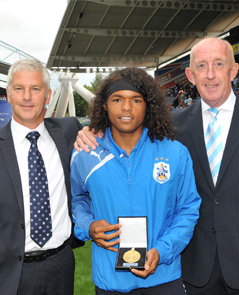 Huddersfield Town’s Duane Holmes has been named as the inaugural winner of the Donald Bell Award by League Football Education (LFE).

Holmes who scored during the Under 21s 2-1 victory over Leeds yesterday, collected his prize at half-time during Terriers 5-1 rout of Bournemouth on Saturday in the Sky Bet Championship.

The award which commemorates the memory of Donald Simpson Bell VC was instituted to recognise the efforts of a player who has overcome adversity in some form during their two-year Apprenticeship in Sporting Excellence (ASE) programme managed by LFE.

Bell was the first professional footballer to enlist in the Army during the First World War and went on to win a posthumous Victoria Cross for the bravery of his actions during an engagement in the Somme, France. Holmes, who joined Huddersfield at the age of 9, has just started his first year as a professional and was shortlisted for the Championship Apprentice of the Year prize at the Football League Awards in March.

The 18-year-old midfielder has been given this special recognition after achieving all elements of his educational programme while making outstanding football progress to reach the cusp of the Terriers first-team during a period in which he has had to show considerable maturity and bravery to deal with personal grief and other adversity.

Holmes, who holds dual American and British passports after spending his early childhood years in the USA, said: “It was a massive surprise to receive this honour. I feel incredibly proud to be named as the first ever winner of the Donald Bell Award. When you hear about what he and others did during both wars it is very humbling. This makes all my hard work and perseverance over the last few years feel worthwhile.

I love being at Huddersfield Town. I can’t think of a better job and I hope to now earn the opportunity to play in the first-team on a regular basis.”

Gordon Taylor OBE, The Chief Executive of The Professional Footballers’ Association, said:“While he may only be young Duane has shown considerable maturity, courage and conviction in the face of very testing circumstances which reflect the qualities of Donald Bell. I am sure these character traits will help him go on to great things in his career and life in the future.”

Andy Williamson OBE, Chief Operating Officer of The Football League, added: “Duane is a thoroughly deserving winner of this award which recognises the development of one of our young apprentices. He is a credit to Huddersfield Town and I hope he enjoys a long and happy career in the football industry.”