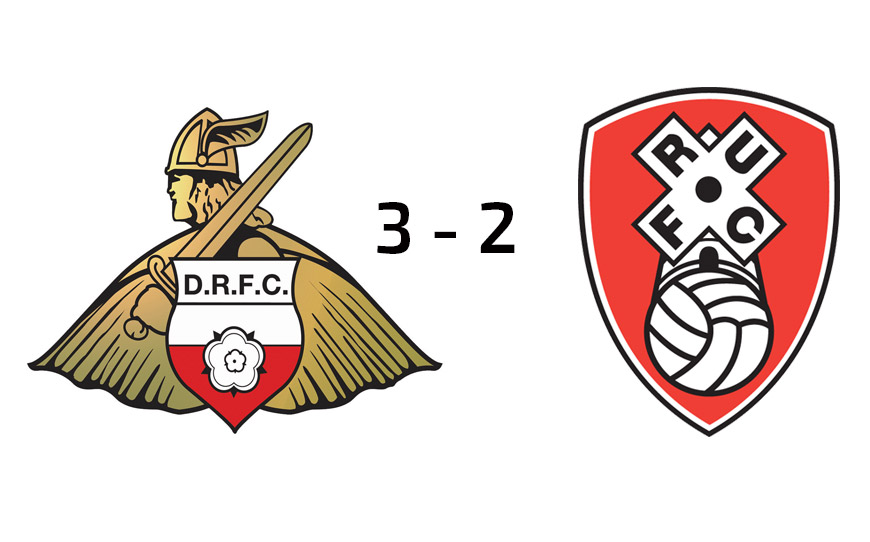 Fletcher’s last gasp intervention from 12-yards-out sealed a 3-2 victory for Rovers in a game packed full of incident.

Doncaster twice took the lead twice and were twice pegged back by the Millers with striker Joshua Kayode bagging a brace. The game might even have gone in the other direction had Rotherham forward Reece McGinley converted a second half penalty, but he saw his effort well saved by James Leverton with the score at 1-1.

Rovers manager Paul Stancliffe hailed his team’s “great character” which he felt had made them “deserving” of their win.

The game started well for the home side, and it took just 5 minutes for Rovers to go in front. A neat turn from striker James Morris allowed him space to fire a shot into the bottom corner.

Rovers continued their dominance throughout the first half, Matthew Overton was next to try his luck following good work down the left hand side. Rotherham goalkeeper Harry Fidler had little trouble pushing his effort over the bar however.

There was a lengthy stoppage in play early on with cause for concern, as Rotherham striker Joshua Kayode took a blow to the head, but fortunately he was able to carry on.

The visitors began to get more of a hold on the game as the first half went on. Kayode, who was a constant threat headed narrowly wide of Leverton’s goal as the pressure began to intensify.

The game sparked into life in the second half, with two goals and a penalty awarded in the space of 5 minutes.
Kayode initially clinically converted a deep corner with a superb header back across the face of goal to equalise for the Millers, who then moments later could have gone ahead from the penalty spot.

That failure was compounded by a Rovers counter which resulted in a foul and from the resulting free-kick Lloyd Henderson put Doncaster back in front.

Rotherham though recovered and grabbed an 88th minute leveller from Kayode, who tapped in from close range after come questionable defending.

The drama wasn’t over though. Rovers substitute Gooden Iyrwah drove into the Millers penalty box in added time and when he was felled a penalty was awarded. Fletcher did the rest to leave his manager, Stancliffe a former Rotherham hero delighted by the outcome.

Paul Stancliffe also reflected after the game that he was pleased with the performance and said all the efforts he had put into training have paid off.

“Certain things that we have worked on in training were put into practice, and it paid off, I was pleased all round,” he said.

“I wouldn’t say we dominated the game, but we would have been unlucky to draw the game, we played well and I’m very happy especially after they equalised late on,” he added.