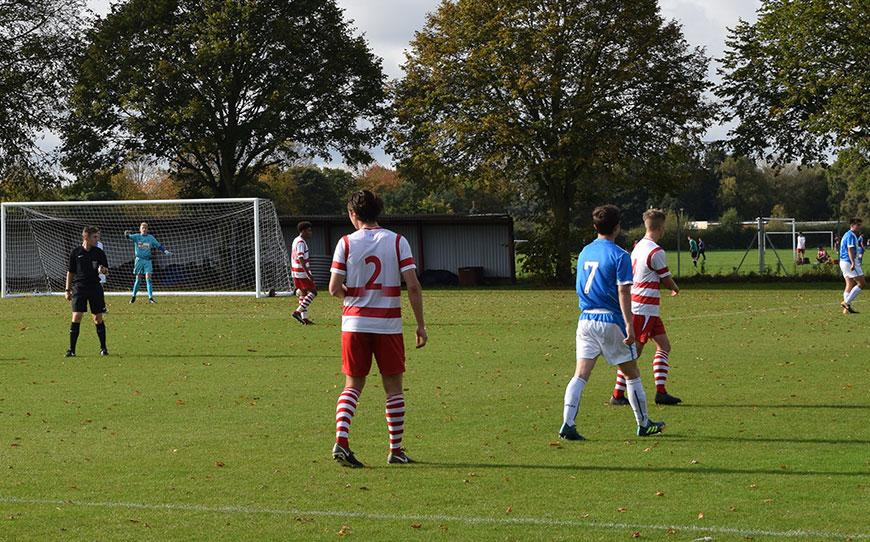 By Joe Harris: Doncaster Rovers Under-18s secured their first victory of the season in dramatic style against Hartlepool United thanks to a wonderful curling free-kick from Danny Amos in the final minute of the match.

Pools defender Jacob Owen had put the visitors in the ascendancy early on, but a superb second half showing from Rovers was just enough to seal the three points as Under-16s player Jack Watson equalised before Donny keeper James Leverton saved a late penalty, allowing Amos the chance to slot in the winning strike.

Having had difficult starts to the campaign, both sides seemed intent on retaining a solid shape early on, leading to a lack of goalmouth action in the early phases of the game.

With very little space to be found in open play, the first chance of the game inevitably came from a set-piece and it produced the opening goal.

Pools managed to whip in a corner to the far post towards centre-back Owen, who lost his man in a crowded area and nodded home from close range to put the visitors in front.

This forced Doncaster to open up in search of a route back into the game and this allowed the away side plenty more openings, with Dan Boyle latching onto a through ball from Jack Cooper, although his effort failed to test Rovers stopper Leverton.

Doncaster Assistant PDP Coach Paul Driver admitted the team have been much stronger in the second half of games this season and once again this proved to be the case.

Left-back Amos clipped the crossbar from a free-kick with the home team’s first real sight at goal before striker Watson was introduced and made an immediate impact.

Watson neatly controlled a high ball in the area and finished emphatically past Pools keeper Elliot Stephenson to level the scores.

The hosts were not content with settling for a point, but left themselves vulnerable at the back and provided United with the chance to snatch the win when Joe Jackson was brought down by Kane Bingley inside the area.

However, Leverton pulled off a tremendous save low to his left from Owen’s spot kick to spare his side’s blushes before Amos stole the headlines in stoppage-time.

The Northern Ireland Under-19 international perfectly placed a free-kick from 25 yards out over the wall and into the top corner to lift Doncaster off the bottom of the EFL Youth Alliance North East table, ending their seven-game wait for a victory.

Rovers Coach Driver told LFE: “We had a sticky patch in the first-half. There were times where we weren’t bad but there was clear room for improvement.

“We brought the boys in at half-time and had a list of things that we wanted them to do and they’re all ticked off now!

“We believe we were unfortunate last week to get a draw in the cup against Port Vale and it’s been long overdue getting the first win today, but no question we deserved it.”