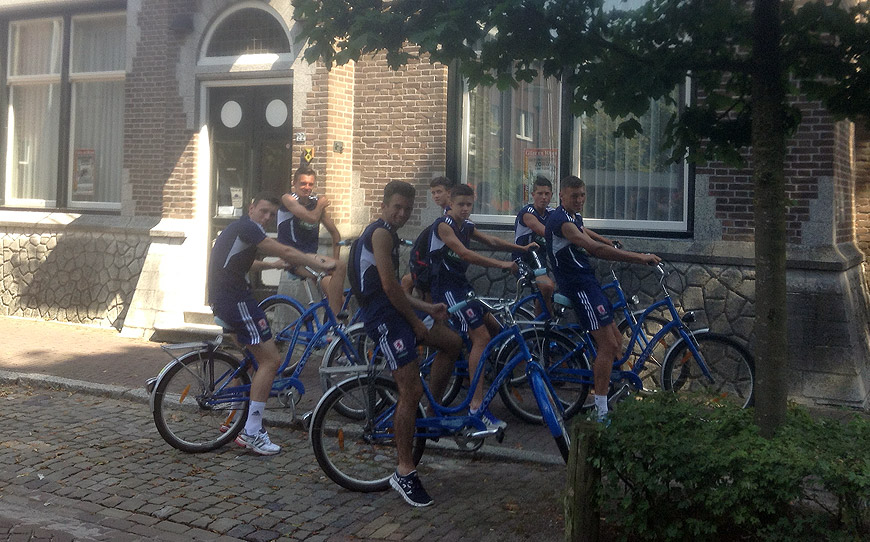 Following our win against Bochum, Wednesday began with a light training session in the morning. We trained for an hour in the hot weather, with the heat not making the session feel more like a gruelling double hit of training.

After lunch, we cycled from the hotel across the border into Germany. The bike ride was a very relaxed activity that everyone enjoyed, instead of the usual intense demanding training sessions that we’ve been having over here. On the way back we stopped off at a cafe in Holland where we were all allowed a bottle of coke. Wild!
The following day, we had another session with the Venlo coaches. In the morning, we started off with passing drills, followed by 3 v 3s, with a lot of focus on over-laps. The session was very beneficial, but the lads and I found it was physically very demanding due to the extremely hot weather once again.

At lunch we had a presentation from the Venlo academy manager, which was very interesting to learn how their set up is different from the English youth system. In particular, the fact that they join with the club Helmond Sport was something I hadn’t considered to be an option back home.

In the afternoon after lunch we had our training session taken by the academy manager, which consisted of a passing and finishing drills, with two teams against each other. After the training we had a less strenuous pool session to recover from the day.
The next morning, we had a light training session in preparation for our game the next day against FC Utrecht. We did our team shape practice and then ended with some shooting. It was still really hot so yet again we worked up quite a sweat!

In the afternoon, we were given a choice of either going into Venlo to shop or staying at the hotel to relax or use the pool. It was nice to have some time to unwind before the game and make the most of our final night before heading home.
Then came game day! The final day of our fantastic trip. In the morning, we were allowed a lie in as we didn’t leave for the game until later on – we all appreciated the extra sleep! We had our pre-match meal before checking out of the hotel and heading to Utrecht for the game.

It was another hot day so the game was always going to be difficult. We started off well and were 2-0 up at half time after a terrific showing. Unfortunately, the heat caught up with us in the later stages, and slipped to a very disappointing 3-2 defeat. It wasn’t the result we wanted to end the tour with, but we can still take positives from our display and the experience will benefit us tremendously ahead of the new season.

Overall, the two weeks have been a huge success and we have really grown as a team. We thank everyone involved for organising the trip and for supporting us throughout.