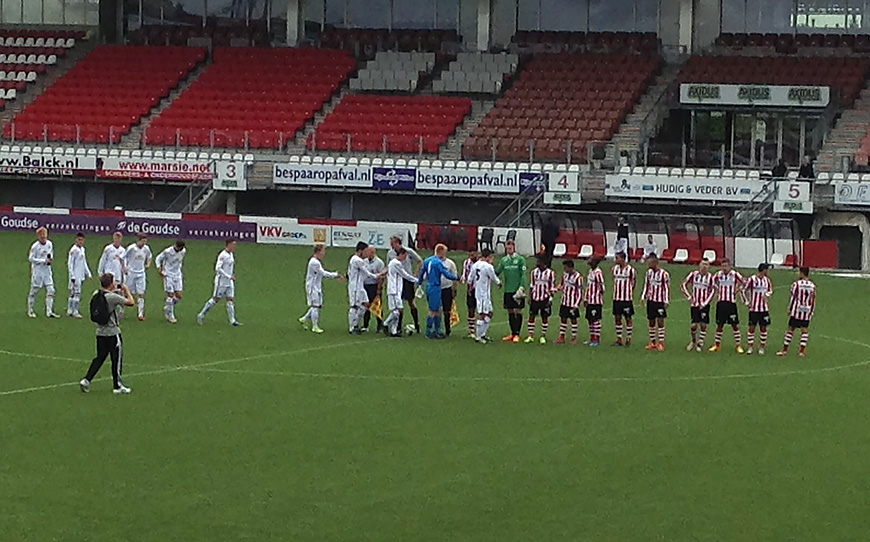 It’s been a busy few days here in the Netherlands, but the experience just keeps getting better!

Our first game of the trip was on Saturday against Ado Den Haag at a local ground and we desperately wanted to kick-off with a win. We felt fresh and raring to go after a couple days of light training, but unfortunately we just couldn’t pull it off.

The game ended 3-2 to Den Haag, but having been 3-0 down, we showed great resilience and character to battle back. It’s just a shame that we couldn’t manage to find an equaliser! There wasn’t much between the two teams and it was a good test for us facing an Eriedivisie side. We certainly felt we deserved more from the game, but they were just more clinical than us when it really mattered. We can definitely take positives though and look forward to our remaining games.

Another positive for us was the opportunity to play on a very good pitch in good facilities, making it easier to play our style of game. Matching up against the Dutch team’s technical, possession-based philosophy will be an important learning experience for us all.

Following our game, we visited Ajax’s Amsterdam Arena and got a tour around the very impressive stadium. I can only dream of what it would be like to play on the pitch with a capacity crowd in!

Afterwards, we went into the centre of Amsterdam and got a taste of the local culture. We were instructed to find certain landmarks in the centre and then tweet a picture of them once we’d found them, which was good fun and created a bit of friendly rivalry between us! Amsterdam is a beautiful city and very multi-cultural, with plenty of rivers and canals – quite different to any city I have visited before.

To finish the day off we went back to the stadium to watch the Dutch Charity Shield game between PSV and Groningen, which finished 3-0 to PSV. The atmosphere was incredible – another fantastic experience!

Overall, the day was hugely enjoyable. It was great for the team to view a new culture in Amsterdam compared to being back home, and then being exposed to a different atmosphere gave us extra motivation to work even harder to achieve.

With preparations for the game against Sparta Rotterdam well underway, we had a light training session on Tuesday morning. In the afternoon, we arrived at their stadium confident and determined to put in a strong performance.

We were more dominant in the first half, but lost our momentum in the second, and frustratingly conceded late on to give them a 2-1 victory. We are certainly learning that you cannot give the ball away to these teams because it’s hard work to get it back!

Despite the defeat, it was another good experience to play at their stadium on a 4G pitch. Playing in a stadium was different to what we’re used to and something the team enjoyed, making it a good occasion against an impressive team.

We feel we’re getting better as the trip progresses and are more determined than ever to make sure we get a win before heading back home!