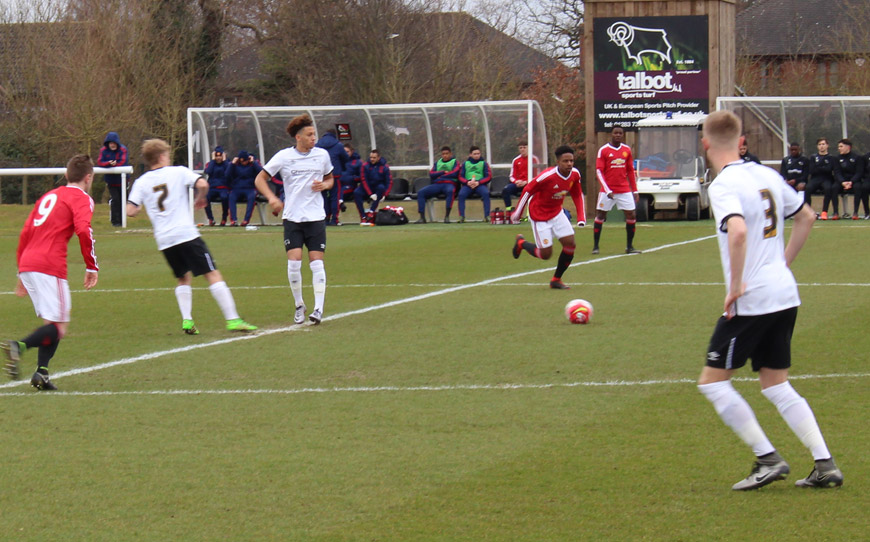 By Jack Furness: Derby County Under-18s moved to the top of the Barclays Under-18 Premier League Merit Group Three after a 3-0 win over Manchester United.

Kellan Gordon hit the opening goal and then set-up Lewis Walker for the second before Alex Babos rounded off the scoring late-on.

It took the hosts just seven minutes to make the breakthrough. Gordon cut in from the right-hand side of the area and calmly slotted the ball under the outstretched arm of George Dorrington in the United goal.

United Under-18 manager Tommy Martin admitted that he had been disappointed by the charitable opening in which he felt his team had handed Derby a “gift”.

After conceding, United grew into the game. Controlling the ball but at the same time failing to trouble the Derby rearguard.

The hosts game-plan was working to perfection and Walker could have doubled their advantage. He ran on to Luke Thomas’s searching pass abut fired wide at the near post.

The Rams looked to finish off the job after the interval. Walker’s cross found an unmarked Emil Jacobsen who hit his shot straight at Dorrington.

Derby remained the ascendant team and scored a second goal on 55 minutes. Jakobsen played the ball to Gordon but it was intercepted by the United defence. Gordon didn’t give up and managed to win the back and run into the area. His cross landed at the feet of Walker who drove the ball into the net.

Two big chances for United came mid-way through the second half. On 74 minutes, substitute Callum Whelan turned Derby captain Alex Cover 30 yards out and fed a ball to Aidan Barlow who shot over the bar. Six minutes later Barlow put a through ball into Zach Dearnley who shot wide.

That was as good as it would get for the visitors though and Babos produced a superb diving header to finish off United. Derby coach Justin Walker was delighted by Babos’ goal comparing it to something out of the 1980’s.

“I think the last time I saw something like that was probably Andy Gray for Everton in the 80’s. You don’t see many of them and I think Alex has slightly tailored his role, he’s been challenged to contribute in a different manner and I think goals are still part of his game.”

“It was nice to see him making those supporting runs we’ve been talking about and getting into those good areas and producing the outcome.”