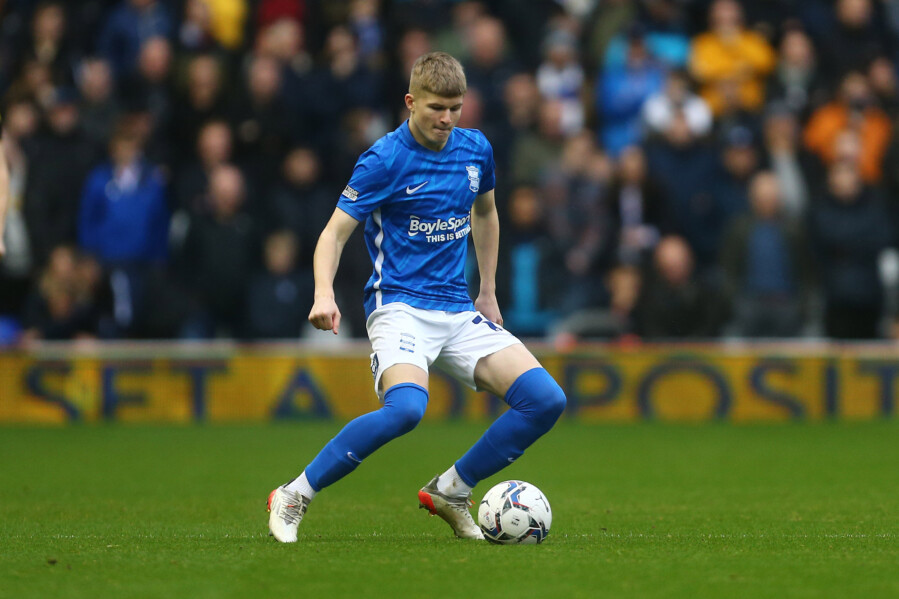 By the end of January 2022, more than 62 LFE apprentices had made their first-team debuts during the 2021/22 season. Here is a selection of clubs handing out opportunities to young players:

Barnsley – Joe Ackroyd has been a Barnsley player since the age of 10 and his dream of playing for the senior side came true when he was brought on in the 106th minute in a thrilling Emirates FA Cup victory over Barrow AFC.

Birmingham – Following in the footsteps of his older brother Jude, Jobe Bellingham got Birmingham City supporters off their seats when he was brought on in the club’s FA Cup extra-time defeat to Plymouth Argyle. The young midfielder’s debut arrived at the age of 16 years and 107 days – just 69 days older than when Jude made his Blues debut. Academy duo Jordan James and George Hall, both aged 17, also made their first-team bows in the same month.

Bristol City – 18-year-old midfielder Ayman Benarous made his first-team debut as a second-half substitute for Bristol City, helping his hometown club defeat Barnsley 2-1 at Ashton Gate. His appearance came just weeks after netting an impressive hattrick for the Development squad.

Hull City – In the same month Jevon Mills was named in LFE’s ‘the 11’, the young Hull City midfielder replaced George Honeyman to make his senior debut in the Tigers’ Championship clash vs Cardiff City.

Millwall –At 15 years and 340 days old, Zac Lovelace became Millwall’s second youngest-ever player when he was brought on by Gary Rowett in the club’s 1-0 victory over Coventry. To feature, the club had to gain permission from Lovelace’s school and allow him to do homework on the team bus. Second-year apprentice Nana Boateng joined academy trio, Tyler Burey, Danny McNamara, and Billy Mitchell, to make a memorable first-team debut against fierce South London rivals Crystal Palace earlier this year.

Accrington Stanley – Young defender Matty Carson made his professional debut on 5th October against Leicester City Under 21s. Carson came off the bench in the 65th minute when the team were 5-0 up and helped Stanley hold on to a well-earned clean sheet.

AFC Wimbledon – The Dons have formed a reputation for using the Papa John’s Trophy competition to give opportunities to their young guns, and boss Mark Robinson saw an opportunity to hand out seven senior debuts for the visit of Crystal Palace Under-21’s earlier in the campaign.

Second-year apprentices Josh Hallard and Quaine Bartley were given the nod to start the game, along with Isaac Olaniyan and Luke Jenkins. In the second half, Ethan Sutcliffe, Marcel Campbell and Aron Sasu were brought on to put the cherry on top of a memorable evening for everyone associated with the Academy.

Bolton Wanderers – 18-year-old midfielder Arran Pettifer made his Bolton Wanderers debut on 5 October 2021 in a 4–1 victory against Liverpool U-21’s in the EFL Trophy, coming on in the 72nd minute for Josh Sheehan.

Charlton Athletic – As far as debuts go, they don’t get much better than Mason Burstow’s, who scored with his first touch in professional football against Crawley Town. That debut goal was the beginning of a hot streak for Burstow, who was eventually snapped up by Chelsea during the January transfer window. The talented trio, Nazir Bakrin, Richard Chin and Ryan Viggars also made their debuts against Leyton Orient.

Crewe Alexandra – The League One club are renowned for nurturing some of the country’s most talented young players, and three more apprentices have been given the chance to showcase their talent this season. Joel Tabiner, 18, made his professional debut against Wolverhampton Wanderers in the Papa John’s Trophy in November, while midfielder Joe Robbins also featured and even went on to grab the third goal in a convincing 3-0 victory at Gresty Road. Young forward Tyreece Onyenka replaced Chris Long in the final minutes of a home game against Shrewsbury Town. 17-year-old Zac Williams has also made numerous appearances, along with defender Connor O’Riordan and forward Connor Salisbury.

Cheltenham Town – By featuring against Exeter City on 5th October, first-year apprentice Will Armitage officially became Cheltenham Town’s youngest ever player at the age of 16 years and 213 days. Apprentices Felix Miles, Joel Hunt, Zak Guinan and academy graduate Grant Horton, have also made their senior debuts under Michael Duff, this time in the club’s 0-0 draw with Chelsea under-21’s.

Fleetwood Town – Former youth team skipper Dylan Boyle, and second-year apprentices’ Sam Bird and Cian Hayes made their senior debuts against Bolton Wanderers in the Papa John’s Trophy in November 2021. The game ended 1-0 to Wanderers, but all three were praised by Head Coach Stephen Crainey for their performances.

Lincoln City – Three months after signing his first professional contract, academy product Freddie Draper was introduced from the substitutes bench in the Imps’ League One clash away at Sheffield Wednesday.

Morecambe – After signing his first professional contract in May 2021, young goalkeeper Andre Mendes was drafted in to replace the injured Kyle Letheren after he went down in the warm-up.  He played the full ninety minutes in a 2-0 defeat to Carlisle United in the Papa John’s Trophy.

MK Dons – Promising winger Brooklyn Ilunga made his first senior start for MK Dons at the beginning of October 2021. The 17-year-old had already racked up three substitute appearances for the senior side before he impressed in the 2-1 home victory against Wycombe Wanderers at left wing-back.

Exeter City – An injury crisis at Exeter City gave 19-year-old Cheick Diabate the chance to make his full League Two debut against Sutton United in January. The highly-rated defender was described as ‘excellent’ by Grecians boss Matt Taylor. The defender has since gone on to net his first professional goal.

Harrogate Town –Striker Emmanuel Ilesanmi made history when he became the first graduate of Town’s academy – which was only launched this summer – to appear for the first team, replacing Jack Muldoon on 83 minutes. He was later followed on to the pitch by midfield duo Brad Williams and Ben Tweed.

Newport County – Second-year scholar Aneurin Livermore made his full League Two debut in September 2021 and played a part in helping his team to a 2-2 draw against Leyton Orient.

Oldham Athletic – For League Two strugglers Oldham Athletic, this season has been the breakthrough year for full-back Benny Couto, who has gone on to make 21 appearances since his debut in August, scoring one goal. Isaac Modi and Trey Turner have also been given first-team minutes recently.

Port Vale – Youth team captain Ellis Jones was handed his first-team debut against Rochdale in the Papa John’s Trophy this season, coming off the bench to play in the centre of midfield, despite playing most of his academy football at centre back.  Young, energetic striker Eden Bailey has also been given a runout, making his league debut in a 2–1 defeat at Newport County in December.

Scunthorpe United – LFE apprentice Harry Lewis made a dream start to 2022, by making his League Two debut against Carlisle United on New Year’s Day and signing pro terms shortly after. His opportunity arrived two weeks after scoring in the Under-18s’ historic FA Youth Cup Third Round tie against Manchester United at Old Trafford.

Stevenage – First-year apprentice Owen Cochrane was handed an opportunity at full-back in Stevenage’s League Two fixture against Salford City in December. While Sam Tinubu made the headlines for becoming the club’s youngest ever appearance maker at 17 years and 18 days old.

This article features in Issue 43 of LFE’s Touchline magazine.