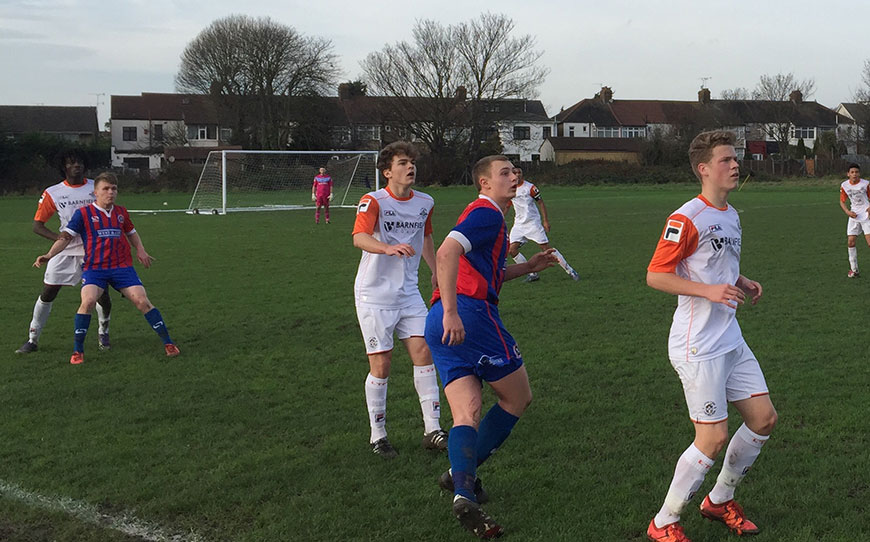 By Gavin Willacy: After this shock result, Luton manager Paul Driver admitted that he had feared the worst in what was supposed to be a routine fixture.

With his top of the table team, unbeaten in all 22 league and cup games this season and facing a side lying second from bottom of the south-east Alliance table, this should have been a formality. Instead it turned into a nightmare for Driver and his team.

The home side took a surprise lead after just three minutes when Josh Brown lost possession, Dagenham forced a corner and centre-back David Nicol-Wilson headed home Henry Burnett’s cross for his first goal of the season.

Luton then dominated proceedings, with wave after wave of attacks into a strong wind but despite earning several free-kicks and corners they rarely threatened an equaliser.

Instead, Luton keeper Liam Gooch had to be alert when Daggers’ left winger Jakub Berkowicz beat the offside trap and broke clear, Gooch deflecting his shot wide for a corner on 15 minutes.

Dagenham doubled their lead on 29 minutes when Nicol-Wilson strode up the pitch unimpeded to exchange passes with a teammate en-route to the Luton penalty area.

Once there he slid the ball under Gooch and followed it to tap it over the line before the mud stopped it going in. The goal signalled delirium among the home team.

Luton hit back almost immediately. A Kavan Cotter corner on the left went to the far post and was headed against the bar by Kyran McGhan-George and striker Freddie Hinds, who had come on as substitute up front for the injured James Verney minutes earlier turned in his 14th goal of the season.

Hinds was one of several players missing from the Hatters’ starting XI who had played in their excellent FA Youth Cup win at Notts County four days earlier, with Academy manager Andy Awford calling up defenders Frankie Musonda and James Justin as he took the first team following John Still’s dismissal.

Most expected Luton to regain control but on a difficult surface and in a gusty wind, Dagenham regained the initiative and got the last goal of the game five minutes before half-time.

Showing greater strength than their visitors, they won possession on the edge of the Hatters’ box and centre forward Joe White bustled his way into the danger zone before driving a fierce shot into the roof of the net from about 15-yards out.

Just before the break, Cotter glanced a header just wide and Dagenham lost centre-midfielder Kai Heather to a groin strain, replaced by first year scholar Harvey Brown, son of Academy manager Kenny who was taking the Daggers’ side so Under-18 coach Micah Hyde could assess the Under-16s on the adjoining pitch. Both coaches will have been delighted with their players’ performance as the underdogs remained composed in the second half.

As sunshine broke through, Dagenham had a fourth goal disallowed for offside and Driver rang the changes, introducing two Under-16s from the bench but it had little impact.

White almost got his second when he charged down Gooch’s clearance only for the keeper to make a scrambled recovery. The Daggers’ tails were up and a fine defensive performance saw Luton’s challenge fade. Young sub Arthur Reid only lasted a couple of minutes before coming off with suspected concussion after receiving a ball in the face from close range, leaving the Hatters down to ten men for the final stages.

They almost conceded a fourth ten minutes from time only for Gooch to save at full stretch from Berkowicz’s shot on the turn, then White shot over, and sub Charlie Holmes sent a fine header just over as the Daggers finished strongly.