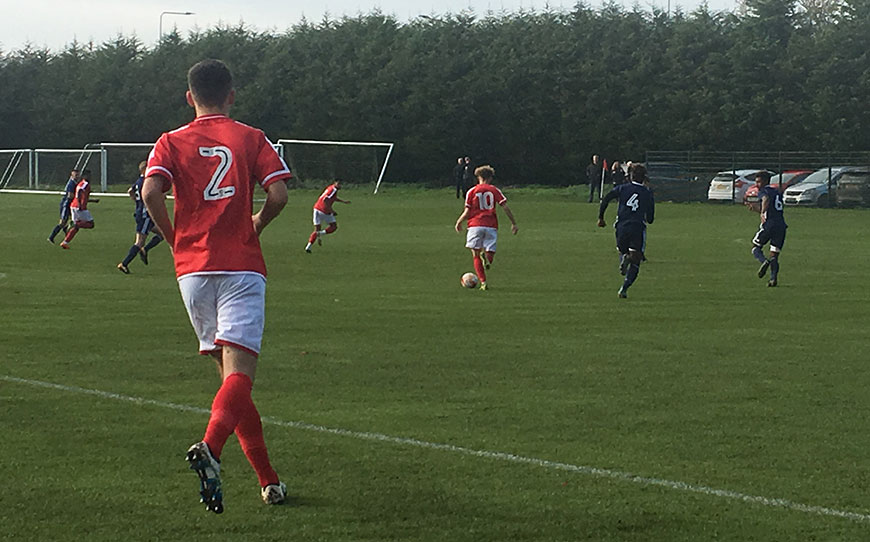 By Joe Williams: Nottingham Forest Under-18s climbed to the top of the Professional Development League North with a 3-2 victory against Crewe Alexandra thanks to a brace for Victor Sodeinde.

Crewe’s Under-16 starlet George Nunn scored twice in the second half to cancel out a two-goal margin, but substitute Junior Powell’s 74th-minute strike secured the points for Forest.

The hosts produced the early goalmouth action with Captain Joe Lynch assisting chances for Malachi Linton and Challis Johnson, but neither were able to beat George Shelvey in the Forest goal.

It took 15 minutes for the visitors to test home keeper Will Appleyard as he pushed away Alex Mighten’s effort, while Luke McCormick and Sodeinde were both denied in quick succession.

However, it was Sodeinde who managed to break the resolve of Appleyard as he steered a low cross into the net from six yards out five minutes before the break.

And it was the same man on the scoresheet seven minutes after the restart when McCormick displayed tremendous strength and skill on the right flank to set up Sodeinde to thunder the ball into the bottom corner.

The Alex turned to Nunn for some inspiration off the bench and it took the highly-rated striker just two minutes to halve the deficit as he rose highest to convert fellow substitute Josh Barnes’ delivery past Shelvey.

And with 20 minutes to spare, the Railwaymen were back on level terms through Nunn’s second goal just 11 minutes after his introduction.

But Forest were determined to end a streak of six games without a win and found a way to restore their lead in fortuitous fashion when Powell chased down a loose ball back to Appleyard and blocked the keeper’s clearance, with the ball diverting towards the net and rolling across the goal-line.

Crewe Under-18s manager Lee Bell told LFE: “I believe they shaded it in the first half but the boys showed good individual character to get back into the game to bring it back to 2-2. But it’s just one of those at the end of the day where we’ve conceded one late.

“Unfortunately, there does seem to be a common theme that’s happening throughout the year where we show plenty of determination but just not presenting the resilience to hold the game to the end.

“We’ve got a lot to work on, lots of individual work, the biggest one for me is their mindset. We know what they can do individually, but they’re playing in a team game and at some point they need to realise what role they have on the team and not as individuals.”

Meanwhile, Forest’s victory sends them to the top of the table, ahead of Huddersfield Town on goal difference after the Terriers were held to a 2-2 draw by Leeds United.

Under-18s coach Gareth Holmes said: “It was a game for the boys to show some resilience and defend effectively. I was a little bit disappointed on how we were on the ball at times, but we can’t always have that picture-perfect game and the lads will need to learn that.

“I said to the boys we felt that our possession based football had been better in previous games and we will want to dominate the ball more consistently and also be able to muster that ruthless edge in both boxes.”