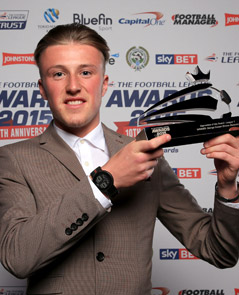 Crewe Alexandra’s George Cooper collected the LFE Apprentice of the Year for League 1 at The Football League Awards 2015.

Cooper received the award at the gala ceremony at The Brewery, London, on Sunday evening in front of over 600 guests from clubs, sponsors and the football industry.

The Football League Awards 2015 mark the 10th year of the awards, which celebrate on and off pitch excellence across The League’s 72 clubs. This year all 72 clubs were nominated for at least one award.

The 18-year-old broke into the Alex first team earlier this season and announced his arrival in Steve Davis’s line-up with a stunning free-kick against Coventry City. He followed that up with a goal at Crawley and found the back of the net against Preston in December.

The youngster has remained in an around Davis’s team since then and has made 27 appearances in all competitions. The youngster who has followed in the footsteps of former Alex apprentice, Nick Powell, an Apprentice of the Year winner in 2012, said;

“I wasn’t expecting it to be honest. It has been a great experience, getting more starts, more appearances and keep on going.

“I’m at a good place now, Crewe, everyone says its a good place for kids, so we’ll have a good pre-season and hopefully just take it from there.”

“Each of our winners thoroughly deserves this recognition and, once again, we’ve seen exceptional levels of talent, dedication and achievement across all our nominees.”