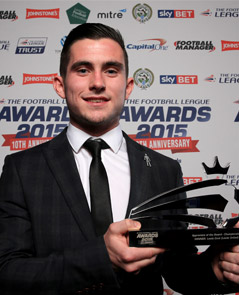 Leeds United’s Lewis Cook has been crowned the LFE Apprentice of the Year for the Championship at The Football League Awards 2015.

The 18-year-old who has been a leading light for Leeds this term was described as “phenomenal” by Massimo Cellino last August. More recently head coach Neil Redfearn hailed the England youth international as the best player to ever come through the club’s prolific academy “by a mile”.

Cook received his award at The Brewery, London, on Sunday evening in front of over 600 guests from clubs, sponsors and the football industry.

The midfielder beat off competition from Charlton centre-back Joe Gomez, an England team-mate and Millwall’s Fred Onyedinma, after the judging panel were impressed by his progression as a player coupled with the effort and endeavour he has shown on the academic side of his apprenticeship. He has also been active in the community through visits and coaching.

“The season has been great for me personally, especially playing the amount of games I’ve played. Hopefully I can keep playing, get some more goals next season. I just want to progress. I want to thank my family, Neil Redfearn for all helping me.”