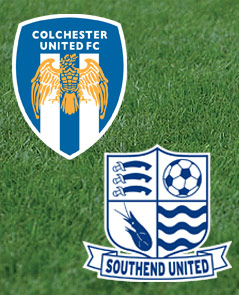 Southend United’s U18s edged passed local rivals Colchester United in a five-goal thriller at the Garrison ‘B’ Ground to progress to the 2nd Round of the Youth Alliance Cup.

Goals from Hicham Abdellah and captain Kane Ferdinand, as well as an early own goal saw the visitors through after a feisty derby encounter.

Southend took the lead on 13 minutes when Julian Okai’s delivery from the right was turned into his own net by Freddie Ladapo with Ferdinand challenging.

Colchester responded well and were level on 24 minutes when Mason Stewart’s corner was allowed to find its way to Craig Arnott who controlled, and finished from close range.

All square at the break, Southend went ahead for a second time on 56 minutes. After Michael Hyland had seen his beaten round the post by Colchester keeper Shaun Phillips, Okai’s back-post corner was met by Anthony Furlonge whose header was turned in by Abdellah from close-range.

U’s Head of Youth Tony Humes then watched on in disbelief as Southend added a third from yet another set piece. This time Okai’s hanging corner causing the commotion – with Ferdinand eventually prodding home.

And while Humes’ youngster made a fist of things when Arnott pulled back a second, the Shrimpers rearguard held firm during the last quarter to see out the game and progress to the next stage of the Youth Alliance Cup.