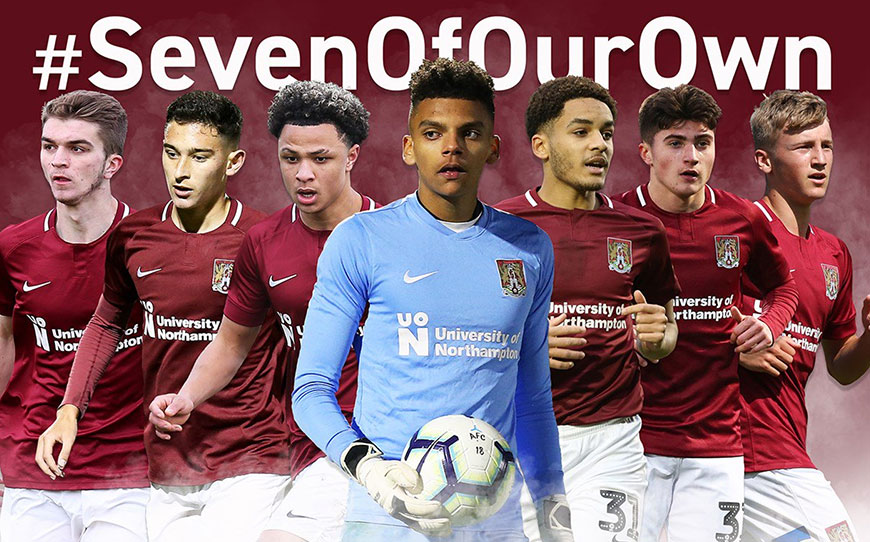 Northampton Town have offered professional contracts to four apprentices, with Bradley Lashley, Ryan Hughes, Jack Newell and Scott Pollock all being given the opportunity to commit their futures to the club.

The quartet follow in the footsteps of fellow academy players Jay Williams, Morgan Roberts and Camron McWilliams, who have previously penned pro deals with the Cobblers.

Five of the youngsters have already featured for the first-team, with Williams’ appearance tally reaching double figures, while midfielder Pollock’s debut in January at Cambridge United made him the first player to appear in the senior side having come through the club’s Football & Education programme.

“It is unusual to offer seven players out of ten professional contracts but that is a sign of how highly we rate these players,” manager Keith Curle told the club website. “Most of them have already played for the first team and we see potential for them to be able to develop further.

“It is a huge tribute to the infrastructure of the club, and to the Academy, that so many local players are coming through in to the squad, it helps the club’s identity and it helps the supporters identify with these boys, many of whom are Cobblers supporters too.

“The Academy has been a huge success story for the club in recent times and our plan now is to ensure these young players have the best possible opportunity to continue to develop and to become first team players in time.

“With that in mind we will be recruiting an additional member of coaching staff in the summer who will come in with particular responsibility for the young players.

“Of course, the players know only too well this is where the hard work starts. They all know they need to continue to improve and develop and competition for places will continue to be very tough next season, but for now we congratulate the boys, their families and the staff in the Academy for their work.”

Head of Academy, Kieran Scarff said: “I knew when I arrived that this was a very strong Academy, but to see seven boys come through from one year group is very, very exciting.

“The club are continuing to invest in the Academy to give young players the best chance of becoming professional players, as the recent appointment of a full time Sports Scientist and a full time Analyst illustrates.

“We offer our warmest congratulations to the players concerned. The Academy and the first team squad work very closely and the pathway is very much open. The lads know they have a big fight on their hands to break in to what will be a strong first team on a regular basis but that is a challenge I know they will relish. They are very proud to be Northampton Town players and the club are very proud of the young men they have become.”

Under-18s coach Jon Brady added: “Having worked with these boys over the last few years, I know how much ability they have and the first class attitude they have. Seven out of ten is a very high number of professional players and not only is that a tribute to how hard the boys work, it shows how much faith Keith Curle and the first team staff have in the Academy here and the young players at the club.

“Of course, there are three players leaving us and we wish them well. We will take them through our exit programme and do all we can to get them fixed up.”