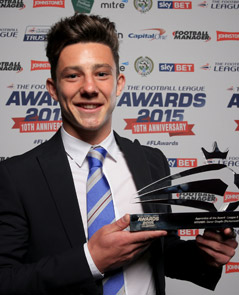 Chaplin who started the season on LFE’s pre-season tour to the Netherlands and recently scored his first senior goal against Morecambe took the prize after displaying a professional and conscientious approach throughout the second year of his apprenticeship.

The young forward who signed his first professional deal at Fratton Park in October said;

“It’s a great achievement, it means a lot to me to make my debut, score my first goal.”

“This is just the icing on the cake. I think the target for me next season is to get into them team, get some starts, make an impression in pre-season and come back as fit as I can and really push on.”