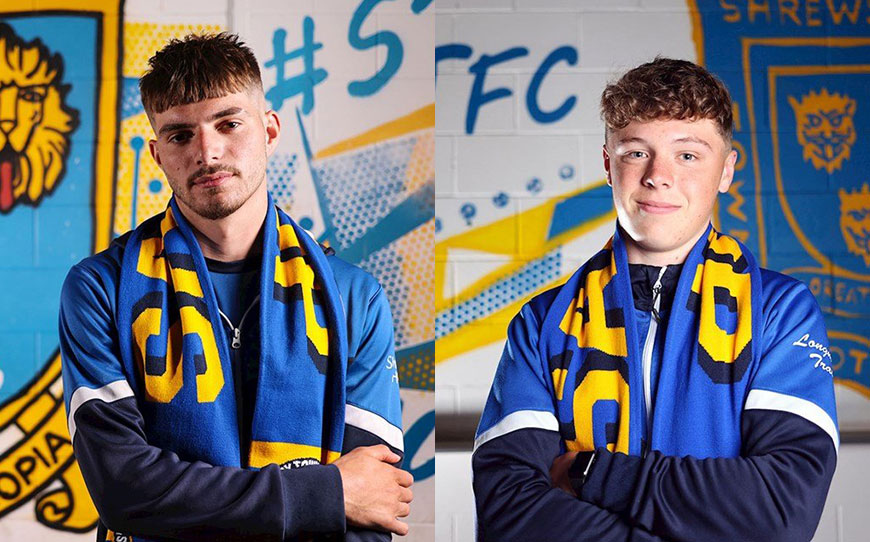 Shrewsbury Town academy players Tom Bloxham and Charlie Caton have penned his first professional deals, agreeing to stay with the club until at least 2023.

Tall frontman Bloxham has enjoyed a successful first year as an apprentice, earning a senior debut in September during a 3-0 victory over Newcastle United Under-21s.

The 17-year-old returned to the first-team fold late on in the season, featuring four times in Sky Bet League One, including two starts against Oxford United and Ipswich Town.

Meanwhile, Caton joined Salop from Wrexham two years ago and has risen through the ranks quickly, having trained with the first team on a regular basis this season.

The 18-year-old striker was handed his senior bow in the Papa John’s Trophy in November, appearing as a late substitute during a 4-3 thriller with Crewe Alexandra, and gained more experience in the competition a month later against Lincoln City.

Caton ended the campaign in style with three league outings in April, coming off the bench against Doncaster Rovers and Wigan Athletic before earning a first start in a 1-0 victory over eventual play-off winners Blackpool.

David Longwell, First Team Coach and Academy Director, told the club website: “Our Academy Head of Recruitment, Gary Wharton, identified Tom and he came in around two years ago. You can see Tom’s attributes with his size and strength. He’s athletic and he’s good technically. He’s only 17, so he has a lot of work ahead of him, but we are definitely happy with the path of his development.

“Part of our structure is bringing scholars who are doing well up to train with the first team. That has really helped Tom, working with those boys. Because we train with a certain intensity, Tom has been able to make that transition a little bit easier.

“Charlie is a natural goalscorer and he did well last year. He was involved with the first team regularly and that has done him well. We are hoping he can kick on now.

“He needs to come in during pre-season and show the Manager what he’s got to offer. He’s a great lad and he’s very respectful. We are now trying to push him because he’s got so much more potential.”