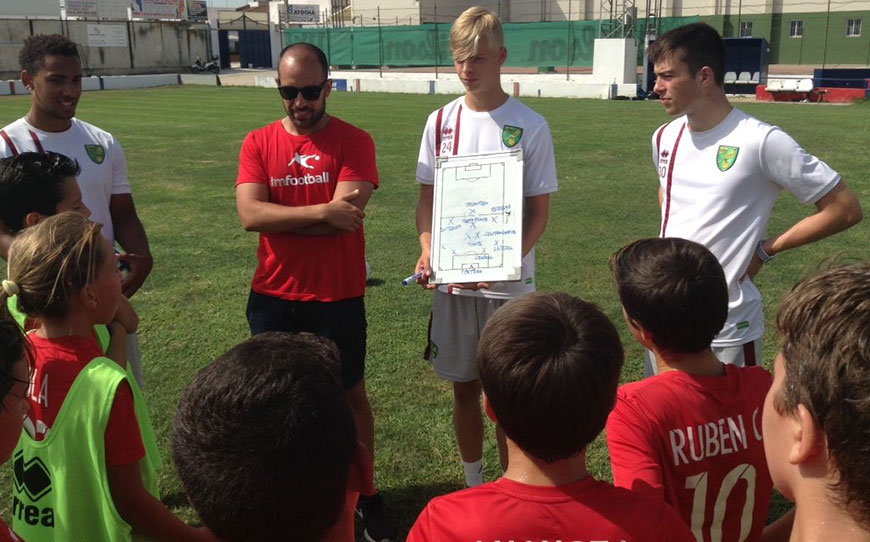 Six Norwich City apprentices used some of their free time during the Erasmus+ pre-season trip in Spain to show support to the local Seville community by putting on a morning coaching session for Puebla CF Under-12s.

The Canaries have started a leadership programme within the Under-18s squad, with Atli Barkarson, Aaron Ekumah, Louis Lomas, Denzelle Olopade, Matt Richardson and Isak Thorvaldsson all stepping up to set an example to the rest of the squad.

Second-year apprentice Lomas told LFE: “The club have put together a group of leaders to organise the whole team, to set positive standards and to put more responsibility on the players and make us work together and bring us closer as a group.

“It’s been a challenge for us but we’ve all dealt with it well. It’s taken us out of our comfort zone and it’s important for us to put ourselves in these roles because it drives the rest of the team on to succeed.

“I hadn’t experienced being in a foreign country with the rest of the boys while having the responsibility of knowing I had to step up and take charge, so it was a positive experience. Two weeks is a long time to be together and you have to keep the standards up throughout.

“Taking leadership off the pitch still requires the same qualities as on it, in terms of being a good communicator, having confidence in yourself and your team-mates, setting an example in the way you behave and making sure your preparation is right.

“That’s just as important because if you do things right off the pitch, you’re constantly developing those skills that transfer onto the pitch.”

While the rest of the squad prepped for their final tour fixture against AD Nervion the following day, the six youngsters delivered various training drills and taught some football-related English words and phrases, before finishing the visit by presenting a Norwich kit to each young Puebla player.

Lomas said: “It was a really productive morning. We had a lot of fun and the kids seemed to get a lot out of it and really enjoyed it – it was great to see them with smiles on their faces all through the day.

“All of us boys worked together to try to improve the skills of the kids and give them a taste of the English language. We’re not used to coaching and especially in a different country and dealing with the language barrier, so it was a great opportunity for us to push ourselves and represent the club in a positive manner.

“Being a role model on and off the pitch is really important for any player because you need to set your standards high and remain disciplined at all times as it’s a competitive environment, so for us to be developing ourselves in this way at this stage is great preparation for moving up the age groups.

“I think it’s given me more confidence in myself and my ability to communicate and mix with the rest of the group, so it’s definitely been very rewarding.”

Coverage of the pre-season trips in Spain & the Netherlands is featured in Issue 36 of LFE’s Touchline magazine.