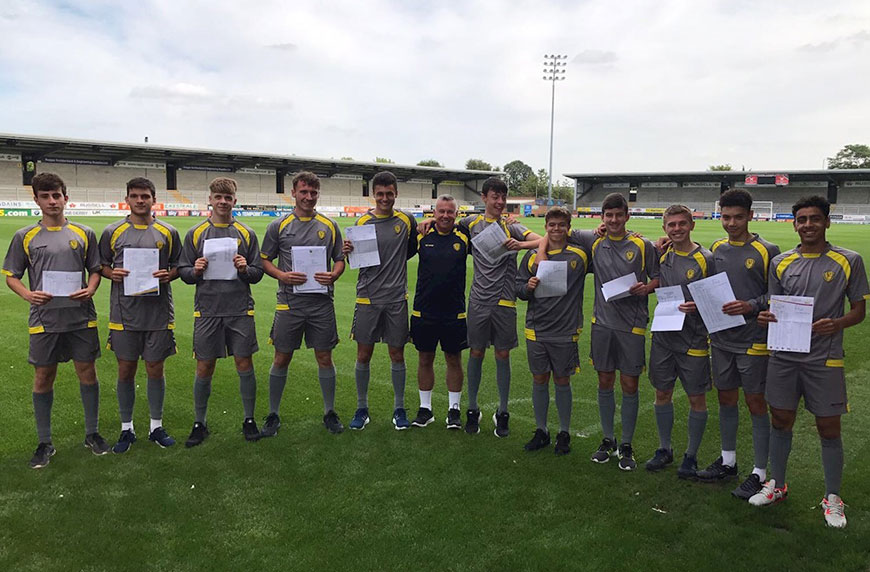 Burton Albion are continuing to develop well-rounded footballers both on and off the pitch after their first-year apprentices produced another successful set of GCSE results.

The Brewers introduced school checks to their recruitment system last year in a bid to ensure players stay on track with school work and maintain good behaviour and attendance.

Albion Head of Education and Welfare Paul Reynolds has revealed the club’s drive to combine strong academic progress with developing their playing skills as they strive to reach the first-team.

He told the club website: “We believe there is a link between academic achievement and decision-making.

“In four of the last six years of the scholars studying at Burton & South Derbyshire College, the highest academic achieving scholar has also secured a professional contract with the first team. These players are Joe Sbarra, Ben Fox, Matty Palmer and Sam Austin.”

Palmer has established himself as a key member of Nigel Clough’s team, racking up 161 appearances in total since his debut as a 17-year-old in an FA Cup first round tie with Altrincham in November 2012.

Meanwhile, Fox and Sbarra were both handed their senior bows last season. Fox featured off the bench during their EFL Cup defeat to Liverpool last term before adding three more appearances to his tally, including a goal in his last outing against Cardiff City.

Sbarra was a regular in the first-team set-up in August, appearing in four games during the month following his debut in the final match of the 2016/17 campaign against Reading.

Elsewhere, Austin is now plying his trade with National League North club Kidderminster Harriers, although he did receive a debut prior to his release in summer 2016, making a brief cameo in Burton’s 3-0 EFL Cup defeat to Brighton & Hove Albion in September 2014.

Of the current crop of first-year apprentices, Ethan Vale and Daniel Cooke were the standouts, with Vale achieving four A* grades, two As, two Bs and two Cs, while Cooke earned six A grades and three Cs.

Albion’s first-year scholars gained more than 70 GCSE qualifications between them, equivalent to a grade of A to C.

“I’m really pleased with my results and so are my parents, I have worked hard for the results and I suppose all the work has paid off,” Vale said.

“The Academy are pleased with the results. Compared to last year we have smashed it out of the park, we have all worked hard and we have the results to show for that.

“It is really uplifting to have done so well as a group.”

Cooke added: “All the hard work pays off; a lot of hours were put into it so it is good to get the results.

“You have got to have a backup in case, for instance, you get injured. You need to have something as a backup and that could be helped by your GCSE results.”