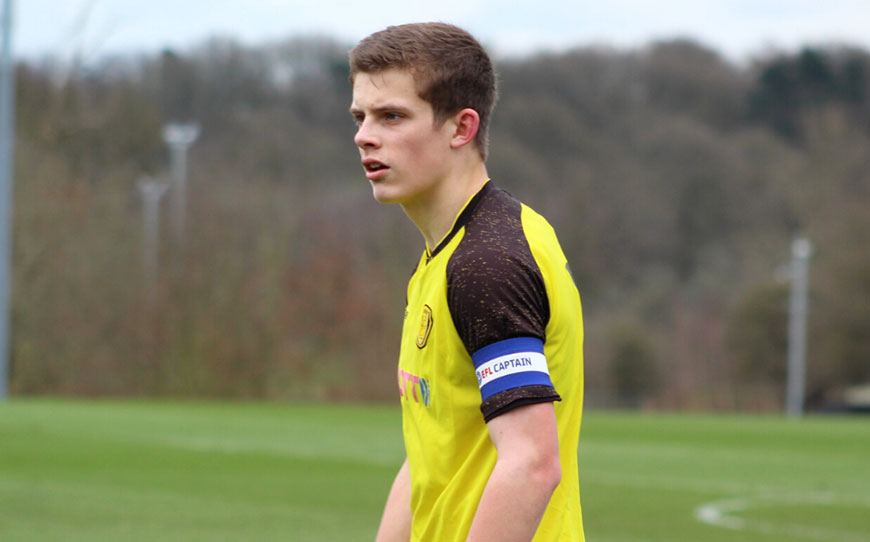 Burton Albion’s Under-18s caused a stir in last season’s FA Youth Cup, beating Category One academies Stoke City and Southampton during their run to the fifth round.

First-year apprentice Ben Radcliffe donned the captain’s armband for their trip to eventual champions Aston Villa after establishing himself as a key figure in the team.

And it was not just on the pitch where the 17-year-old made his mark, having been named as one of this year’s BBC Young Reporter competition winners with his piece, ‘The experience of being an apprentice footballer at a professional club’.

“I was looking for football scores on the BBC Sport website and noticed there was a link promoting the competition,” he told LFE. “It said something along the lines of ‘write about what you do’ and I think being an academy footballer isn’t often documented, so I thought it’d be a decent topic.

“I can’t say I really have a massive interest in writing, but I saw it and thought ‘why not’? I wrote about my day-to-day experience as an academy player and they loved it, which was completely surreal.

“I didn’t expect to win, I just felt it would be good experience to enter and maybe something I could stick on my CV. To end up being one of the winners and seeing myself being interviewed on national TV was bizarre.”

More than 2,500 young people aged 11 to 18 entered, with the versatile midfielder becoming one of 15 winners, triumphing in the Me and My World (16-18) category.

His submission, judged by editors, presenters and reporters across the BBC, including Huw Edwards, Greg James, Alex Jones and Laura Kuenssberg, highlighted the importance of mental health in football, while he also shared his experience of being an apprentice at Burton.

“I’m not afraid to put myself out there and do things that others might not have the confidence to do,” said Radcliffe. “Some lads might be conscious of what their teammates think of them if they do something that’s not quite the norm, but I’m not concerned about that.

“Fortunately, I haven’t experienced mental health issues, but I recognised that others might be going through some difficulties. I wanted to make the point that it is a normal thing and wanted to show my teammates that they can rely on me for support if they’re struggling with anything.

“Everyone goes through negative phases from time to time, but there is always light at the end of the tunnel. The more people speak out about mental health, the more common it becomes as a topic, which then hopefully encourages more and more people to open up. That’s why I wanted to be involved in that movement to creating a new culture.”

Determined to be a leader in all aspects of the apprenticeship, Radcliffe is excelling in the classroom, too. The talented teenager is studying the BTEC Extended Diploma and an additional A-Level in business, which he believes is benefiting his football development.

“Having the right attitude in college, where you’re engaging with the teachers and staying focused in lessons, definitely helps you on the pitch,” he continued. “The lads respect the work I put in, so even though I’m doing it for me, if I can inspire them as well, that’s a bonus.

“You’ve got so many responsibilities as a footballer; it’s not just limited to kicking a ball around on a field of grass. You’re in the public eye, you become a role model for others, you’ve got to be able to communicate properly to handle media commitments and you need the mental strength to handle pressure and expectations.

“Being professional and respectful in every aspect of your apprenticeship is very important. You can only do so much on the pitch and you need to be a good person as well as a player.

Anyone who gets into an academy is obviously a good footballer, so it’s how you develop yourself off the pitch that can really set you apart from the rest.

“The college work has also directly improved my game because some of the topics are about tactics, analysis, performance and diet. Obviously, we do video sessions with club staff, but it’s really helpful to analyse your game with someone completely different, who isn’t watching you every day and focusing on your known strengths and weaknesses.”

By committing to his studies, the Brewers prospect will unlock several transition options for himself at the end of the apprenticeship, providing exciting opportunities if his ultimate goal of being awarded a professional contract does not come to fruition.

“It’s not healthy to be focused on football all day every day,” Radcliffe added. “I wouldn’t say I do my A-Level in my spare time, but sometimes you can be getting home from training at 2pm, so you’ve got a lot of extra time compared to people at school. I use that to do some reading or complete some work that I’ve been set.

“The football side of the apprenticeship is very intense and that’s ultimately what we all sign for a club to do, but having the education alongside that gives you time off from focusing all your energy on football. I personally prefer to do something productive, rather than spending hours on video games.

“I’ve particularly enjoyed my business A-Level because it’s not related to sport. I study one-on-one with a tutor and it gives me time to focus on something completely different, which really helps to avoid getting swept up in the pressurised football environment.

“Obviously, my objective is to get a professional contract, but I’ve already done plenty of research and have a clear vision that if I don’t, I want to go to America to study a business management or business-related degree.

“It’s going to be a demanding season trying to earn a pro contract, but at least I can feel at ease knowing that I’ll be prepared to go down another pathway if football doesn’t work out.”