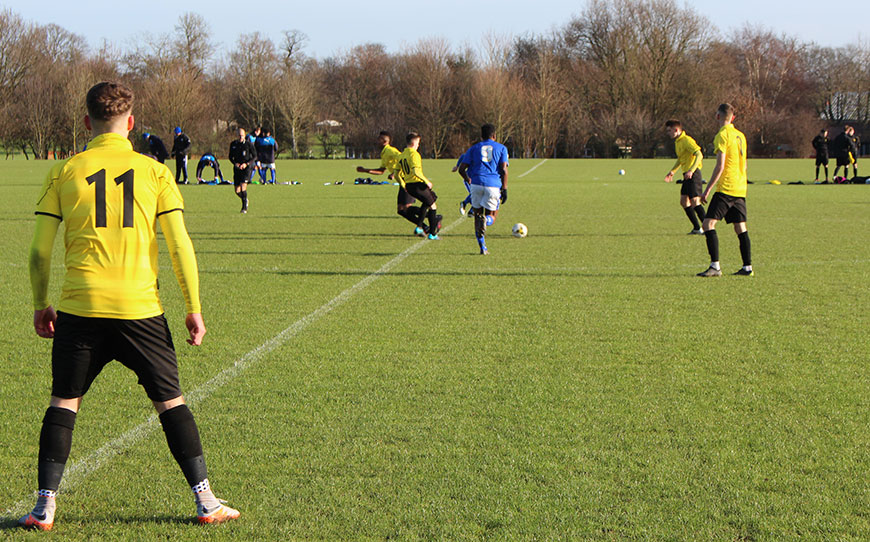 By Jack Furness: Burton Albion’s Under 18s eased to a 3-1 win over Chesterfield, to leapfrog their opponents in the North East Youth Alliance.

Burton’s victory, their first since October in the league lifted them to 8th while the Spireites drop to 10th.

The Brewers took the lead within the opening minute. A kick down the middle almost from kick-off fell to Joe Sbarra and he took the ball around the Chesterfield goalkeeper Dylan Parkin and slotted it into an empty net.

Sbarra was excellent throughout with the Burton coach Sam Rose later saying, “He’s a technical player, he showed some glimpses of quality.

“When he’s confident like he was he does some brilliant things in tight areas, he’s knocking the ball past people, he’s nutmegging people, he’s playing the ball round the corner and he’s creating chances.”

“He’s in a position where he’s trained with the first team a few times, all we can do as a club and academy is give boys an opportunity to play,” he added.

Albion continued the pressure in the opening exchanges. Sbarra curled a shot wide and Marcus Dinanga miskicked a cut back from Dylan Garnett all within the opening ten minutes of the game.

The first chance for Chesterfield came on 24 minutes when a defence splitting pass from Joe Rowley found captain George Milner who won a corner. The resulting ball in caused a goalmouth scramble that was eventually cleared by the Albion defence.

Just before half time Rowley again played Milner through but the forward hit the post. Two minutes after the interval Burton doubled their lead.

Ben Fox made a surging run forward and Charlie Dowd- one of five U16s in Albion’s squad cut inside his marker and flashed a shot past Parkin.

Chesterfield pulled a goal back in the 62nd minute. Ricardo German fed a ball out wide to Rowley who ran into the area and then saw his cross shot deflect off defender Brad Smith into his own goal.

Any hopes of a comeback were cancelled out a minute later. Spireites defender Jake Smith, under pressure from Sbarra, lost the ball leaving Parkin stranded. The midfielder kept a cool head and played the ball across to Dinanga who tucked it into an unguarded net.

Chesterfield had a late penalty shout turned down as Smith slid in on substitute Martel Daswell though academy manager Mark Smith admitted that he was more frustrated by his team’s inconsistency.

He said: “That’s kids for you, they’re up and down.

“They get you to a point where you think that things are beginning to drop into place and then they’ll get turned over.

“You’re not going to get the finished article they are 25,26,27 if they are still in the game so that’s the kind of thing we look for.”