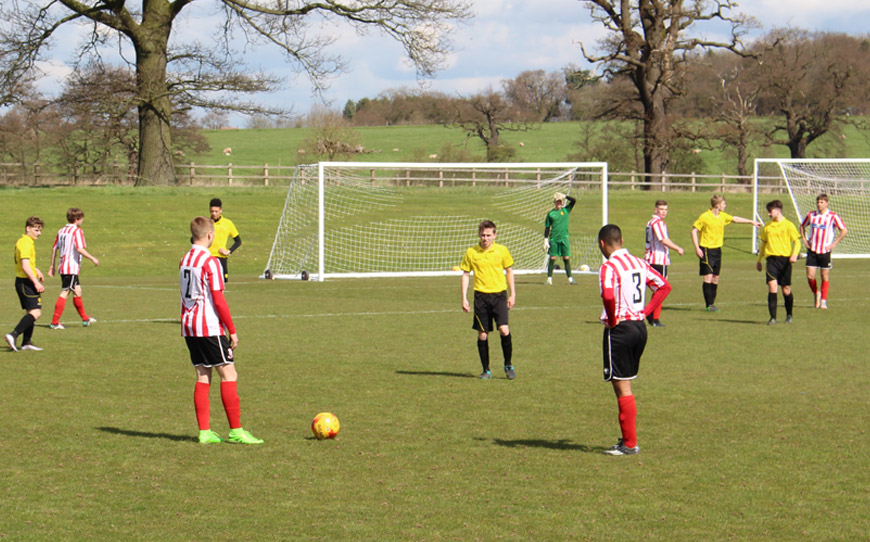 By Jack Furness: Burton Albion’s Under-18s came out on top against Lincoln City in a game featuring many Under-16 players as the Youth Alliance North East season draws to a close.

On a sun kissed morning at Wellbeck Defence College, goals from Joe Sbarra and Tristan Thompson-Matthews secured a comfortable win for the hosts which maintained their slim hopes of winning the North East Youth Alliance and in the process killed-off Lincoln’s title hopes.

The Brewers started positively. In the 5th minute ball from Cameron Steele to striker Jake Davies was intercepted by Lincoln defender Jack Wetherell and put out for a corner.

The corner was taken by Steele and met the head of captain Charlie Gatter who drew a fine save from ‘keeper Michael Antkowiak in the visitors’ goal. Eight minutes later a rasping shot from Sbarra flew just over the bar.

Burton took the lead in the 19th minute when winger Charlie Dowd found some space on the left, he then passed it to the overlapping Reece Hutchinson who played the ball across the box to Sbarra who guided the ball past Antkowiak.

The link-up play between Dowd and Hutchinson on the left for Burton was a constant threat throughout until Dowd was substituted mid-way through the second half.

Academy coach Sam Rose praised the duo’s contribution. He said; “They’ve been in the under-16 group together and they understand each other.”

“Reece is a good defender but also good going forward and Charlie Dowd is really exciting to watch, he takes people on, still has a bit to learn about his position but on and off the ball fantastic.”

Lincoln’s first real effort on goal was an impressive effort by Archie Moyses from 25 yards, which had Burton goalkeeper Lewis Walker scrambling across goal but the ball flew just wide.

The first half ended 1-0 to the hosts but it would take some time in the second half for the game to liven up again.

On 70 minutes Moyses whipped a corner into defender Luke Anderson who headed over the Burton goal. From the resulting goal kick, a dangerous attack was nearly rounded off by Burton substitute Jack Henchcliffe, whose shot was brilliantly stopped by Antkowiak on the line.

As the game entered the last 10 minutes, Burton launched a dangerous counter attack. Henchcliffe passed the ball onto Matthews just inside the Lincoln half who ran at defender Ryley Thompson before knocking it past him, leaving him a free run on goal. He slid the ball past Antkowiak and the ball and had enough pace on it to cross the goal line before Anderson made a sliding lunge to stop it.

Lincoln City academy coach Dean West had no complaints about the outcome and insisted his players have done an admirable job this term.

“For where we are Lincoln City, the resources we’ve got and the pool of players we’ve got, we’ve done really well. We are really pleased with how we’ve performed throughout the season.”