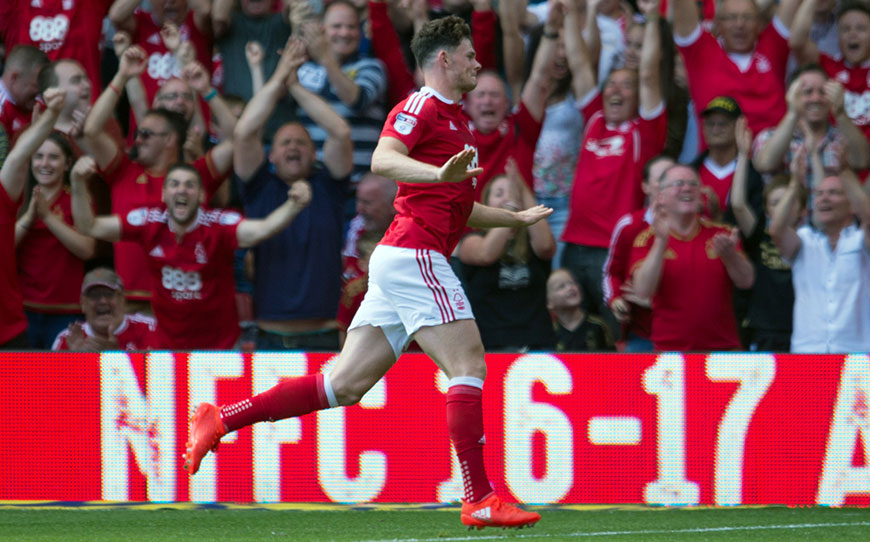 Nottingham Forest winger Oliver Burke has become the most expensive Scottish player ever, joining Bundesliga side Red Bull Leipzig for a fee in the region of £13million.

The 19-year-old who came through the apprenticeship programme at the City Ground in 2015 after joining the club as an 8 year-old signed a five-year contract with the German team.

Burke scored his fourth goal of the season for Forest at the weekend in their 3-1 victory over Leeds United. However while newspaper speculation had linked him to Bayern Munich and several Premier League clubs, newly promoted Leipzig secured his services.

Sporting director Ralf Rangnick told his club website: “He is an outstanding talent with an awful lot of potential.”

Burke made his Forest debut in September 2014 and earned his first international cap against Denmark in March this year.

Rangnick added: “He fits with the high pace and way of playing very well and will make his next sporting development step with us.

“He is exactly the sort of player we were looking for. We are really happy that we have managed to lure such a talented player away from England. He is tall, unbelievably fast. He’s got lots of promise for the future and is a real uncut diamond.”

“This transfer is important, especially because several top clubs were interested.”

The player himself made a short statement on social media to thank those that had supported him during his time in Nottingham. It read:

‘Where to start. I’ve been at Nottingham Forest since I was 8 years old. It has been my second home for 11 years and it has been an incredible and emotional journey for me. The decision I have made hasn’t been an easy one and I want to personally thank Gary Brazil, Jack Lester and all the academy staff for everything they have done for me, Without their input and help I wouldn’t be the player people are talking about today. When I found out that Forest had agreed a deal to sell me it was a surprise, but I understand that the transfer fee should help to stabilise the club and allow Forest to sign at least two or three quality players who can help the team push for promotion.

My Forest team mates have been amazing and have supported me at every point and in every game. I’ve got my fingers and toes crossed that they can continue to kick on under the guidance of the Manager Philipe and Director of Football Pedro Pereira.

The NFFC Fans are nothing short of the best, they always have been and always will be! Thank you for supporting me and all the kind messages. I will miss you all.

I will continue to follow Forest and support the team in every game unless of course they are playing against me in the Champions League!