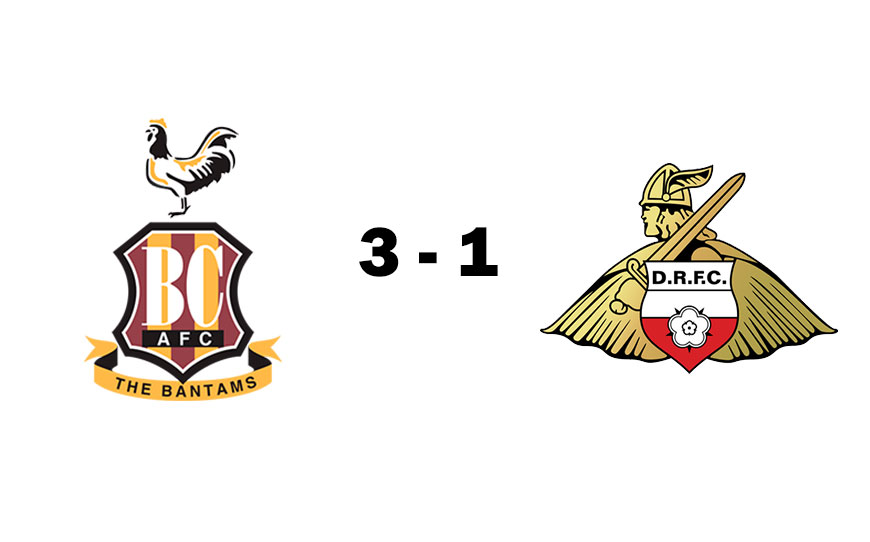 Martijn Smith opened the scoring for the visitors, but second-half goals from Jorge Sikora, Kielan Adams and Connor Shanks ensured that Bradford extended their unbeaten run in the league to five games.

It was the young Bantams who started the game brightest, creating a handful of chances early on. Lively attacker Eddy Prata, operating down the left side, was the main protagonist in attack but a breakthrough did not come as the Donny defence held on during the early onslaught.

Despite the positive start, Bradford found themselves trailing inside 10 minutes after a loose ball on the edge of the penalty area was excellently guided into the bottom corner by defender Smith, with City stopper Alfie Darke unable to react quickly enough.

The hosts responded well but failed to break Rovers’ resolve before the break, while Jack Watson and Myron Gibbons threatened to double the margin with reasonable efforts at goal.

After the restart, Bradford continued to enjoy most of the possession in pursuit of an equalising goal and came close through Eliot Goldthorp, who was inches away from connecting with a dangerous cross to the far post.

However, parity was eventually restored from a set-piece as Sikora headed home from a corner to swing the momentum firmly in City’s favour.

Bradford’s dominance and persistence to complete the turnaround soon paid off as they converted another dead ball situation, with second-year striker Adams nodding the ball into the net.

Wade Ripley was introduced for the Bantams and he almost made an immediate impact when he was played through on goal, but Rovers keeper Declan Ogley blocked off the angle well and made a fine save.

In search of an equaliser, Doncaster committed more bodies forward and the gamble nearly paid dividends as Myron Gibbons worked an opening, but his effort was thwarted by Darke.

And the home side were able to take advantage of Donny’s attacking intent by increasing their lead as they countered quickly and set up substitute Shanks to slot home into an empty net to secure all three points.

Doncaster’s Under-18s manager Paul Stancliffe said: “The best team won, there’s no doubt about that. We didn’t adapt to the way Bradford’s tempo and formation changed, so in the end there’s no complaints with the scoreline.

“There’s a lack of organisation and a lack of communication from set-pieces. Nobody seems to be taking charge, so it is a concern but you don’t become a bad team overnight.

“It hurts today and the lads are upset, but that’s football. You look for a reaction and if we go on a run like what we’ve just had, not just from this season but the end of last season, if we can do that then we’ll be happy.”