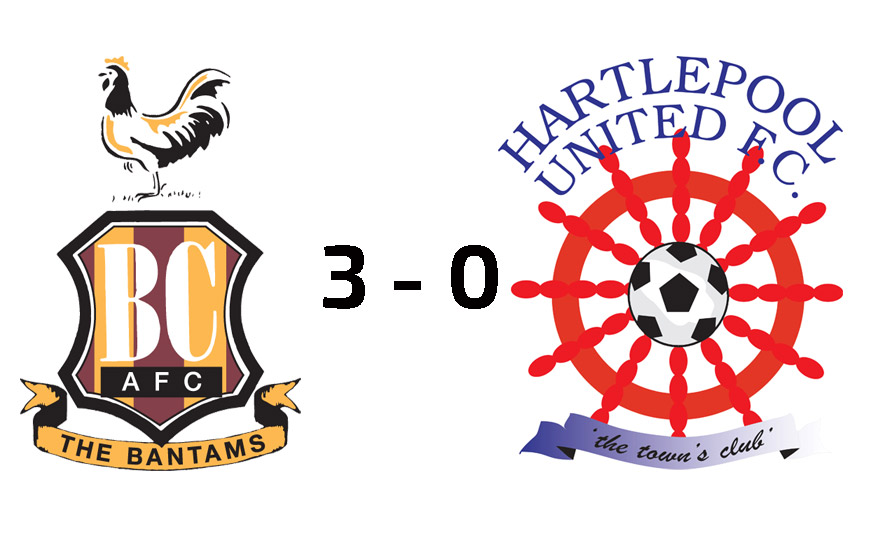 By Adam Clapham: The Bradford coach Steve Thornber described his team’s 3-0 victory over Hartlepool on Saturday as their “best performance of the season”.

The first goal came after just 8 minutes of play. Hudson’s tricky play down the left allowed the opportunity to find Aitken who finished into the top right corner.

Ellis Hudson recently signed a professional contract with the Bantams and his display against Hartlepool showcased his quality. Bradford’s second came after a cross field ball was brought down by Hudson, who managed to shrug off two defenders and finish past goalkeeper Ryan Catterick.

Catterick was the busier of the two goalkeepers, yet despite shipping three goals, he showed his qualities too. Niah Payne’s driven effort was tipped narrowly wide, while a Hudson effort destined for the top corner was brilliantly palmed wide.

It wasn’t long though before the Bantams sealed victory and this time the goal came from an unlikely source. Having featured in last weeks behind-closed-doors friendly defeat to Liverpool, right back, Tom Windle’s confidence has enjoyed a boost and here he capped a fine performance with a stunning effort into the top left hand corner that left Catterick with no chance.

Hartlepool did fashion a couple of noteworthy chances but were unable to impose themselves on the game for long enough periods. Liam Travers missed Pool’s best opportunity when he was sent through on goal but he was unable to convert.

“We played a similar team on Tuesday in the reserves against Walsall, the manager (Stuart McCall) said to some of the lads that they needed to do better” said Thornber.

“I reiterated that today, they had to win their own individual battles which I thought they did and there was some promising performances out there.

“Ellis Hudson I thought was outstanding, Tom Windle as well, both have had first team experience in the EFL trophy and you could see why today,” he added.