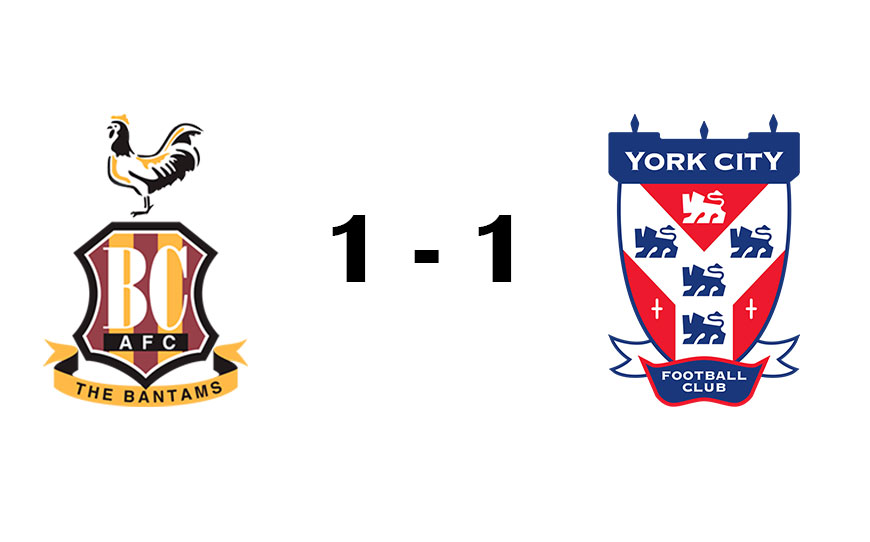 By Lewis Redmond: York City Under-18s rallied from a goal behind to rescue a point against Bradford City Under-18s in an entertaining affair in the EFL Youth Alliance North East division.

Trialist Tom Clare netted an early opener to put the young Bantams ahead at half-time, but the Minstermen grew into the game in the second period and equalised through an Aston Harrison header just after the hour mark, ensuring the spoils were shared.

Both sides have endured a tough spell, with Bradford heading into the game having won one of their previous six matches, while York had secured just two victories in that time.

However, the hosts held a psychological edge after winning the reverse fixture 2-0 in August and forced their way in front within the opening five minutes when Reece Staunton’s defence-splitting through ball found Clare, who finished coolly past keeper Ryan Whitley.

There were chances at both ends, with Clare coming close to adding another, while Alfie Darke was alert in the Bradford goal to prevent an impressive Aaron Haswell free-kick.

Another opportunity came and went for the visitors as Haswell fired wide of the far post from a tight angle, but they were not to be denied after the break as skipper Josh Rogerson powered a header from a corner against the crossbar, with the rebound falling kindly for Harrison to nod home the leveller.

The game continued at a frantic pace and both sides created decent openings. First-year stopper Darke reacted quickly to keep another York set-piece at bay, while at the other end Christian Farrar struck an effort wide before substitute Dan Aitken squandered the chance to net a late winner.

And despite neither side settling for a draw, a decisive goal did not arrive, meaning both clubs remain near the foot of the table with the season drawing to a close.

“I’ll be honest, I’m very disappointed to not take three points from that game,” Bradford City PDP Link Coach Martin Drury told LFE. “Although our chances came a little bit later on in the game, I think we had enough to score four or five goals in that game.

“I thought we started really bright in the first 10 to 15 minutes, moved the ball really well, created a couple of chances, obviously got the goal, and I was quietly optimistic about how the day would go. I just think we started to take our foot off the gas a little bit.

“We had a lot of the ball in the first-half, we just didn’t probably have enough advanced territory as we should have done. We had a lot of the ball across the middle of the pitch, when in reality we want to get into the final third a little bit more often. The more we played shorter and switched play, I just think we failed to recognise opportunities to go in behind.

“If we think back to the Notts County game (0-3 loss) and compare it with this one, I thought we were five or ten times better today. So, have we got better? Yeah, we’ve progressed since the last game, we’ve learnt a lot more lessons. But do we want to be a lot better than where we’re at? One hundred per cent.”

York City Academy Manager Mark Spencer said: “I think it could have gone either way, it was one of them games where if someone just takes that chance then you walk away with all three points. I think it’s fair to say that both of us missed them chances that could’ve won us the game.

“Over the last two weeks now we’ve fallen behind by a goal and we’ve come back. Last week we won and this week we’ve got a point. Something that I really want to instil in them is that desire and that commitment to work as a team, not to be just an individual within a squad.”