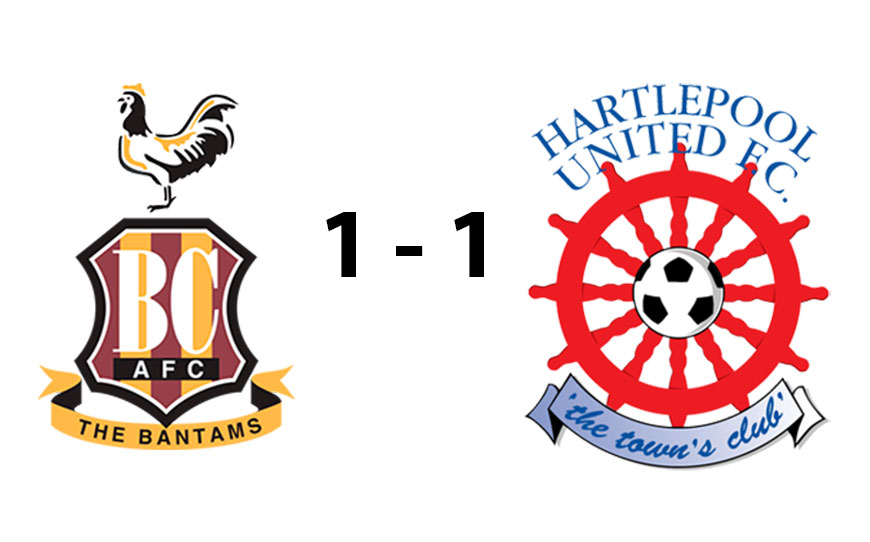 By Lewis Redmond: Bradford City Under-18s recovered from falling a goal behind to secure a point against a spirited Hartlepool United Under-18s side in a 1-1 draw in the EFL Youth Alliance North East.

Following an uneventful first period, the game sprung into life after the interval, with Pools taking the lead courtesy of a sublime free-kick from Lewis Orrell before Reece Powell struck for the Bantams to divide the points.

The visitors were almost gifted an opener in the first few minutes when skipper Jacob Owen was presented with a free header following a free-kick into the box, but he failed to get enough power behind his effort to trouble City keeper George Sykes-Kenworthy.

Second-year apprentice forward Powell then fired harmlessly over after being played in by Neil Patience in an otherwise cagey opening 40 minutes.

The tempo picked up for the remaining five minutes as Powell teed up Jake Maltby on the edge of the area to drive a low shot at Pools stopper Alex Lawrence, while Orrell’s incisive pass allowed Connor Simpson in on goal, but the tall striker could not convert.

Simpson, who featured in LFE’s October 2017 edition of ‘The 11’, threatened again after the restart and it was the visitors who finally broke the deadlock on 53 minutes through a superb free-kick from Orrell.

Hartlepool have only recorded one victory so far this season and they were unable to hold on as they lost control of the game after taking the lead, with the hosts rallying to draw level with 15 minutes remaining.

Substitute Dylan Drovi’s driving run and shot was parried by Lawrence but into the path of Powell to convert the rebound and restore parity.

Pools responded well to the setback and could have snatched all three points when Liam Pritchard came off the bench and hit a controlled volley onto the outside of the post with his first touch.

The result means the visitors remain second-bottom despite being unbeaten in their last three outings in all competitions, while the Bantams have not registered a win since September to leave them in ninth.

Hartlepool PDP coach Ian McGuckin told LFE: “Taking the full game into account we are a little disappointed having dominated possession overall. But I suppose all in all it probably is a fair result.

“We’re three unbeaten now so we’re looking to obviously progress further with that and keep that run going, turning draws into wins.

Bradford Under-18s coach Michael Collins said: “We lacked a bit of penetration up top which is an issue that we’ve had for most of the season, but I thought the spells of possession and the probing passes and little pockets they were trying to find were what we were looking for. We don’t just want to have the ball we want to have it to create chances.

“It’s never easy to go behind in a game but that’s another little fillet for the boys. There’s been a few times this season where we have gone behind and we haven’t been able to reign the other team back in and I felt today that the lads showed a lot of good character and dug in there.”