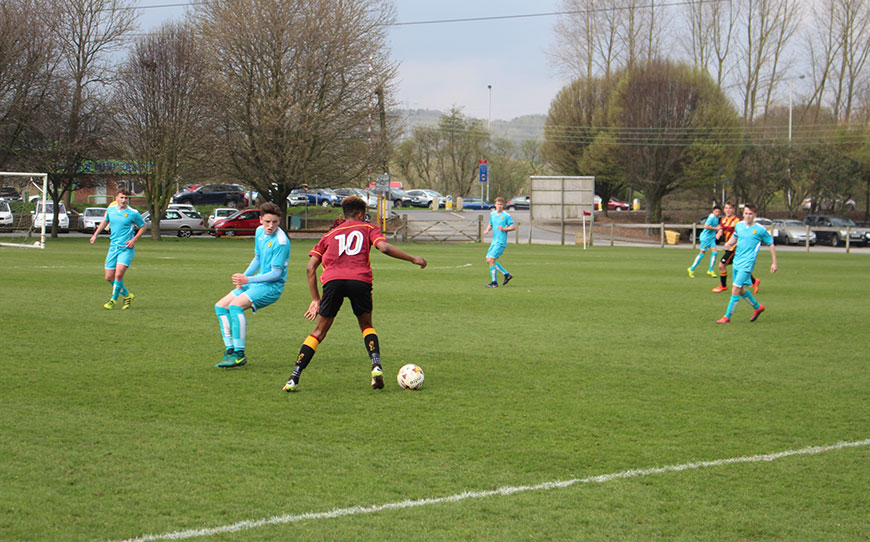 Kyle Clamp’s 48th minute leveller for the Brewers cancelled out Curtis Peters’ thunderous effort moments before to seal a point for the away side.

Burton were agonisingly denied an opener seconds into the fixture, with Ethan Vale’s searing strike from range cannoning away off the crossbar to signal the Brewers’ attacking intent.

The home side continued peppering Hawkins’ goal, with the Burton keeper spectacularly tipping Neil Patience’s speculative drive behind in the 32nd minute to keep the Brewers level.

A pulsating second-half opening saw Bradford race out of the gates to gain the advantage, with midfield man Peters darting towards the Burton box before unleashing a sumptuous strike into the bottom right corner beyond the hapless Hawkins.

Seconds later however, a hesitant home defence were punished when a lofted ball was latched onto by the onrushing Clamp, who touched beyond a sprawling George Sykes-Kenworthy from close range to bag an instant leveller for Burton.

Despite a relentless wave of attacking pressure from the away side throughout the remainder of the second half, a tenacious defensive performance late on saw Bradford secure a vital point.

“First half, I thought we did really well. We passed the ball about in our shape and they couldn’t get near us,” said the Bradford coach, Steve Thornber.

“They changed their shape to avert all our pressure, which worked quite well for them. In the second half they came back, and they looked to be the stronger team.

Thornber noted his side’s need to focus on improving their attacking quality heading into the final few fixtures of the campaign:

“We’ve had some really good play up until the final third, and that final pass is something we’re trying to work on, an area we know we need to improve on.”

Thornber’s opposite number Sam Rose lauded his team’s play, but highlighted Burton’s wastefulness in front of goal as a key reason for The Brewers leaving without the three points:

“There were lots of pleasing aspects about our performance, we got better as the first half went on.

“We changed our shape a little bit to deal with Bradford’s play, and in the second half I think we were the much better team and were disappointed not to win the game.

“We got back into the game quickly, and I thought we could’ve scored six goals today as we had so many clear-cut chances that we didn’t put away.

“We’ve got three games left, we’ve set the challenge to the lads to win them all. We were the better team today in large parts, but the score-line doesn’t reflect that.”