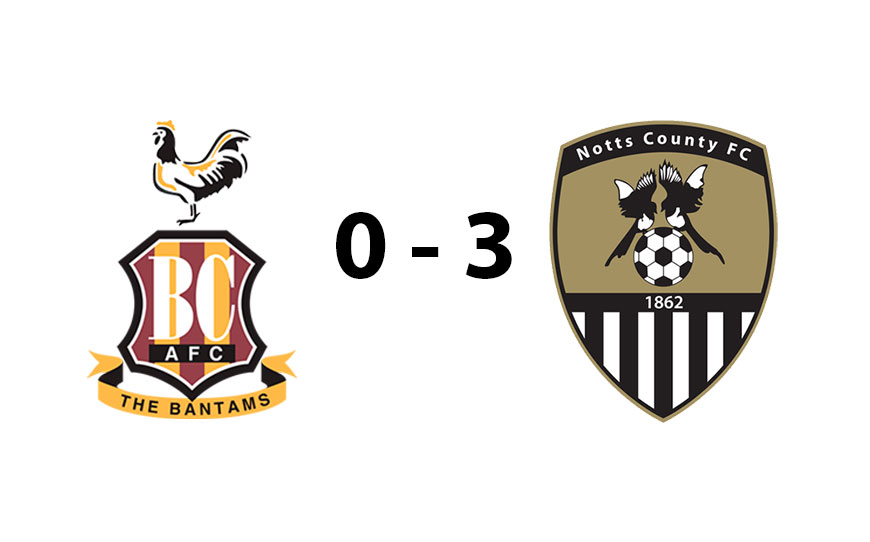 Despite fielding a line-up containing just three second-year apprentices, County lifted themselves up to second in the table thanks to second-half goals from skipper Declan Dunn and a brace from exciting Under-16 Kion Etete.

The first half was evenly contested and largely uneventful as both sides maintained a solid defensive unit, with just a couple of half-chances falling to the visitors as Jack Henchcliffe and Etete went close, although they both failed to test Bantams stopper Alfie Darke.

It took until the 55th minute for the game’s opening goal and it was no surprise that the ever-threatening Etete produced the finish after he dispossessed Bradford captain Sam Wright on the edge of the area before slotting home via the post.

Keeper Darke prevented County from adding some breathing space 10 minutes later when he denied Dunn and Etete after a goalmouth scramble, but he was unable to keep them at bay for much longer as He Zhenyu ran down the wing and squared the ball to Etete, who made no mistake to notch his second of the match.

And the points were sealed with ten minutes to play. Away captain Dunn capped off an impressive performance by bending a superb free kick into the top corner from the edge of the area, giving Darke no chance.

Notts County Lead PDP Coach Simon Clark told LFE: “We’ve been in a really good place now for quite some time. We made some tweaks at half time, and I’m really pleased with how we came out in the second half.

“We just changed the rhythm of the game, which was something we talked about, and I’m really pleased, really pleased with the result. Totally deserved.”

Clark was particularly pleased with the performance of goalscorer Dunn. He said: “We’ve played him on a higher line recently because the first-team want to see him in a different role.

“He’s very adept at the ‘No. 4’ position, so he likes to play in that area and control the rhythm but it’s harder when you play on that wide-side diamond because it’s not his natural thing. But for his development it’s a really good habit to get into so that sort of vertical work is really good for him.”

“Their mindsets seemed a lot more positive than ours and then they had moments of quality that we didn’t have, and, ultimately, you’re not going to win games when that’s the recipe. When they’re better than you in all departments then you’re going to struggle to win games and, credit to them, they deserved it.”