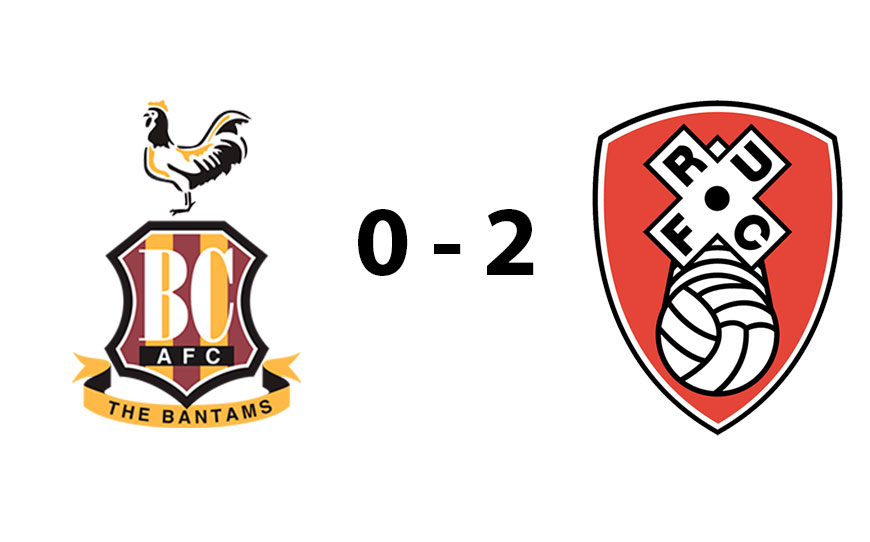 By Lewis Redmond: First-half goals from Jake Southern-Cooper and Tom Maguire were enough for Rotherham United Under-18s to see off Bradford City Under-18s side in a 2-0 victory in the EFL Youth Alliance North East division.

The Millers lost for the first time in 16 league matches dating back to April in their previous outing and responded with intent, almost taking the lead inside the opening 10 minutes.

Bantams centre-back Ollie Kirkpatrick lost possession in his own penalty area and his error was nearly punished by Maguire, who fired a driven volley towards goal that was brilliantly tipped over by keeper George Sykes-Kenworthy.

However, chances proved few and far between after that in an evenly-contested first-half until the deadlock was finally broken five minutes before the interval when first-year apprentice Southern-Cooper was left unmarked from a corner and powered a header into the bottom corner.

And the margin was doubled just three minutes later as Maguire surged into the area and unleashed an effort beyond the reach of Sykes-Kenworthy and into the net.

The hosts, whose line-up included three 15-year-olds, reacted positively after the break and enjoyed a greater share of possession, although they ultimately lacked the cutting edge to create many clear-cut openings to reduce the deficit.

With Rotherham content with their two-goal advantage, Bradford piled on the pressure in the dying embers, but the visitors remained resolute to hang on for a comfortable victory to lift them into second in the table, one point adrift of leaders Mansfield Town.

Rotherham Lead PDP coach Ciaran Toner told LFE: “We’ve got to have a good combination of how good the result is against how good the decision-making is, both as individuals and as a team.

“It’s nice that we’ve gone on such a great run, it just reflects well on the programme that we’ve got and I suppose on the boys’ commitment to their success levels.

“We have a philosophy at the football club, and today it was clear that the boys showed a great understanding of what was required within that.”

Meanwhile, after a fourth defeat in five games, Bradford Under-18s Lead Coach Martin Drury said: “I didn’t think there was a great deal in the game to be honest. The disappointing thing from our point of view is the two goals we conceded; I feel they were both avoidable.

“In the first half, we were nowhere near the levels that we’re capable of. In the second half, we changed our intensity and our play with the ball, moving it a lot quicker and forcing them back. We were looking for that spark, but it never really came. We didn’t create enough chances, we got into their territory, but we didn’t create those chances we needed to get back in the game.”