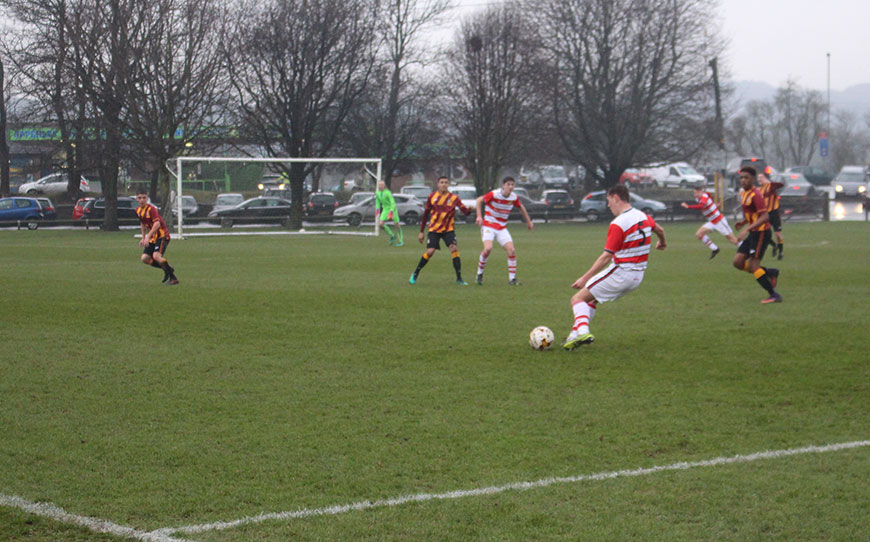 By Seb Gigner: A stunning drive from Doncaster’s Cody Prior that cannoned away off the inside of the post was the closest either side came to scoring in a fiercely-contested 0-0 draw in the North East Youth Alliance at Rawdon Meadows on Saturday.

The early opportunity sparked a dominant first-half performance from the visitors, but Bradford fought back strongly in the second period, with neither side able to break the deadlock in a chance-filled encounter.

Moments after kick-off the fixture sparked into life when Prior’s speculative drive bounced away off the post, denying Rovers an early advantage.

However, Doncaster came close again in the 25th minute, when James Morris rifled his effort in the box agonisingly wide of the far post to signal Rovers’ attacking intent.

The Bantams almost raced into the interval with the advantage when Casey Taglione’s spectacular overhead-kick from a Bradford corner deflected fortuitously wide off the head of Doncaster’s Danny Amos.

Doncaster stormed onto the attack in the second-half, with Morgan James somehow blazing his strike from six yards out over the crossbar following a goalmouth scramble.

Rovers were were almost punished for their poor finishing when The Bantams’ Taglione raced through alone, only to be denied by a sensational last-ditch tackle from the recovering Kane Bingley.

A shift of momentum saw The Bantams controlling the fixture in the dying stages, with Kielan Adams’ fierce strike forcing a sprawling save from the diving James Leverton as the game remained scoreless at the final whistle.

Bradford coach Steve Thornber lauded his inexperienced side’s performance and the way in which The Bantams grew into the fixture in the second-half.

“Going into the game we’d have been delighted with a point,” Thornber said.

“We’ve only got seven fit apprentices, so we went into the game starting two under-15s and five under-16s. We’re delighted with the performance, especially the second half when we had a couple of chances.”

Thornber noted his side’s struggles in front of goal this season, and highlighted it as a key area in need of improvement going forwards.

“We’ve struggled all season in that regard, Casey Taglione scored a few last season, but he’s not firing at the moment. We’ve struggled to find a target man, and we’re just a little bit short currently in that area.”

Thornber’s opposite number Paul Stancliffe insisted goals will come for his side if they continue to create chances, and was pleased with Rovers’ performance:

“I thought we were very good, some of the football we played in the first-half was exceptional,” Stancliffe said.

“Obviously, we’ve got to improve on finishing, but we do that anyway, games like this can happen. Overall the way we passed, played and our movement was very pleasing. You can have days like this at any level, and I’m sure if we continue playing and continue creating chances like today the goals will come.”