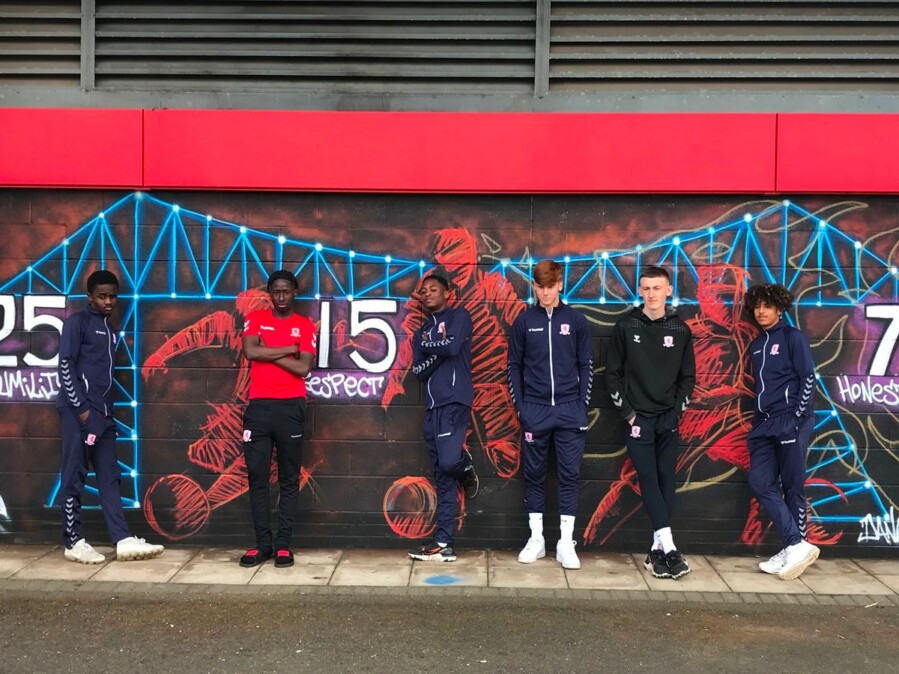 Boro’s talented teens pioneered the Teesside Trailblazers project, leaning on their own experience of recognising and tackling social injustice as a team to inspire other young people to take on racism in their school and communities.

In total, 34 schools and approximately 3,200 young people took part in a summit, in which they were challenged to devise their own class charter to create positive change. More than 80% of the teachers who entered their class for the Teesside Trailblazers celebration day said it was their first involvement in a social action project, and every one of them said they would happily do so again having seen such an engaged response from their pupils.

Speaking about the initiative, Under-18s midfielder and Trailblazer Luke Woolston said: “It’s been great being a part of this programme. I visited a primary and secondary school with my teammate Ash McCarthy to educate them on racism and the issues around it. Initially I was a little bit nervous going in to speak because it’s not something we’ve done before, but it was a good experience.”

Teesside Traliblazers was organised in conjunction with Big Ideas, and been funded by The National Lottery Community Fund, DCMS, The Virgin Money Foundation and the #iwill campaign, which support young people’s access to high quality social action opportunities.

Woolston and five of his teammates paired up to devise projects with school children to help combat racism in the school environment. The shared passion to drive positive change stems from an incident that happened 12 months ago, the 17-year-old explains.

“There was an incident with a teammate who received abuse, which nobody did anything about until he spoke about it a while after,” he said. “If we were able to spot it, we would have been able to stop it at the start. To see the effect it had on him as an individual affected us all.

“We are hoping that speaking about personal experiences like that will make more people aware of how they can help in certain situations. People might claim that it is banter, especially in somewhere like a football dressing room, but it is never banter and it is wrong – that’s just one of the messages we wanted to get out there.”

Classes from Darlington primary school Reid Street and Yarm-based secondary school Conyers were selected as particular standouts for their contribution to the day, and invited to visit Rockliffe, where Boro’s Under-18s laid on a fun-filled day of physical and technical challenges and activities as well as a tour of the training ground learning about all the different departments that support Academy and senior players.

Head of Education, Barry Dawson, has been delighted with the project and how it has progressed: “The programme has been massive success and hugely supported. The aim was to make the celebratory event as fun as possible.

“We’ve had Trailblazers that have come through the academy, from the age of 9,10 and 11, and gone on to play for our first-team, and their journey is an inspiration for the current trailblazers. What is particularly pleasing for me is that this project has been driven by the players, with some input from Big Ideas, but predominantly it has been the apprentices running it.

“We all feel as though we have a social responsibility wearing the Middlesbrough badge to deliver these initiatives within our area. The football club sits at the centre of a lot of peoples lives; we are a pivot point in providing hope and aspiration, so setting good examples and being good people is so important. That is something that we expect of the young players, to take on that kind of responsibility and be role models for everyone within our community. The more they understand that, the better equipped they will be if they become professionals.”