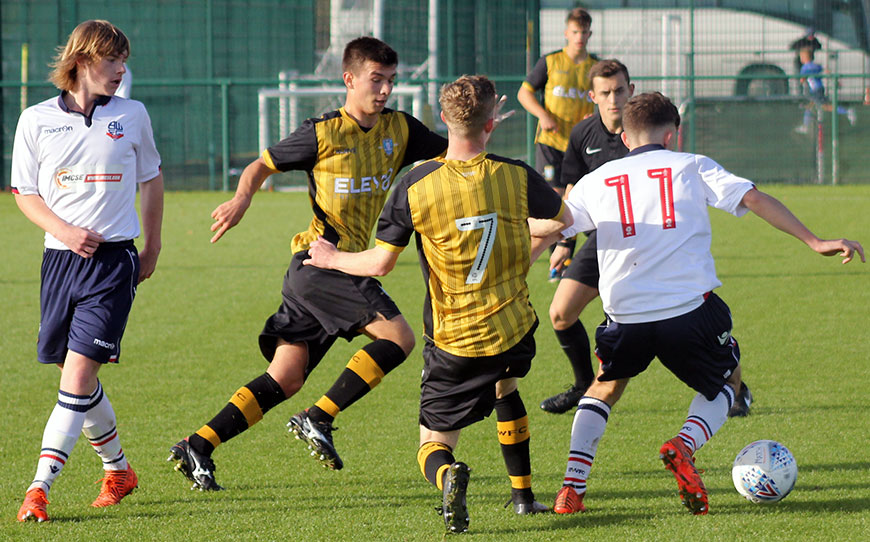 By Kane Brooker: Sheffield Wednesday Under-18s missed out on a late victory when Layton Swaine’s 87th minute goal was ruled out for offside as they endured a goalless stalemate at Bolton Wanderers.

Wanderers could have climbed one point clear at the top of the Professional Development League North with a win after Leeds United and previous leaders Huddersfield Town played out a 2-2 draw, but they were fortunate to hold on as substitute Swaine’s tap-in was disallowed to lift the Owls off bottom spot in the table.

Bolton dominated the early proceedings with Matthew Argent-Barnes looking particularly lively, while Shakeel Jones-Griffiths struck an effort narrowly wide of the post before Dennis Politic failed to test Wednesday keeper Joe Walker with a lob from 20 yards out.

The visitors threatened to produce an opening on the counter-attack when Preslav Borukov and Alex Hunt linked up nicely, but some resilient defending prevented them from getting a shot away to sum up a frustrating first-half for the Owls.

Bolton Under-18s coach Gavin McCann told LFE: “We started okay, but we didn’t really break them down – we couldn’t get the crosses in or get in behind them.

“For 20 minutes we were on top, but then they came into the game a bit. Both teams defended quite well and our keeper kept us in it with some good saves. There was probably a lack of quality in the final third.”

The away side were much improved after the restart and forced Trotters stopper James Aspinall into a fantastic save, albeit with his face, although he was almost caught off guard moments later by a first-time effort from Jordan Lonchar, who was introduced off the bench.

The whites responded positively by controlling possession, but remained unable to show the required quality in front of goal to break the deadlock and were almost undone at the other end by another Wednesday breakaway.

Lonchar came close for a second time with another strike at goal following a rampaging run down the left flank, while Swaine, Stefan Gavrilov and Hunt were all thwarted by Aspinall.

The game continued to open up in the latter stages and the hosts felt they should have been awarded a penalty when Eddie Brown was pulled down in the area after Luca Connell delivered a dangerous whipped free-kick.

However, it was Wednesday who would find the back of the net as Swaine tapped home a cross from the right wing into an empty net, only for a contentious offside decision from the linesman to deny them.

“It was a competitive game, both sides had the commitment and effort and tried to play in the right way,” Wednesday Youth Development Phase coach Ben Wilkinson said. “We lacked in the final third, but we’re happy to keep a clean sheet after conceding too many goals this season.

“It wasn’t a bad day for us, either side could have nicked it. It would have been great to come off with a victory, but a draw was probably a fair result.”