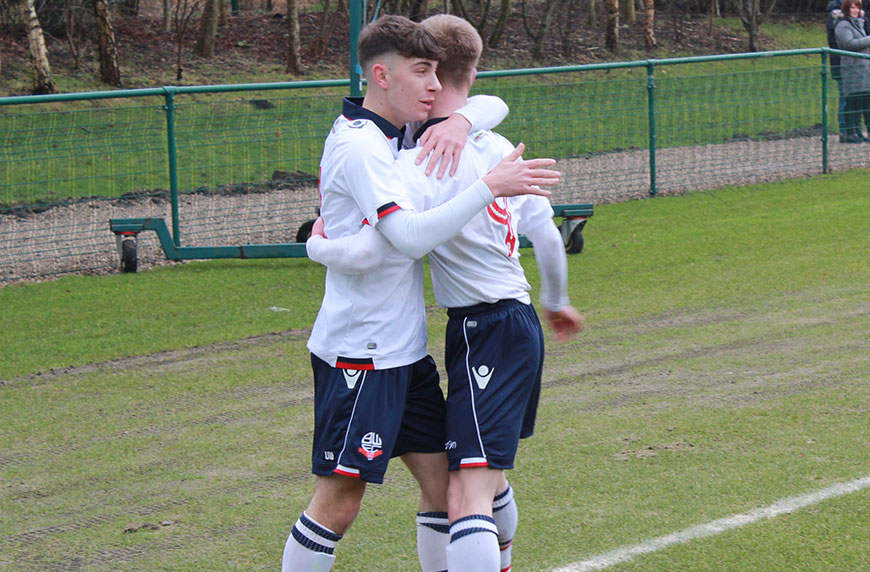 By Nicholas Dusabe: Bolton Wanderers Under-18s returned to the top of the table in the Professional Development League North with a comprehensive 4-0 victory over bottom-club Sheffield United Under-18s.

Luca Navarro and trialist Mason Birch both bagged twice for the hosts as they returned to winning ways, condemning a young Blades side to their sixth consecutive defeat in all competitions.

Bolton applied pressure on the visitors from the off with lengthy spells of possession and were close to opening the scoring when Ted Moulden’s powerful header struck the crossbar.

The breakthrough came shortly after as Navarro received possession of the ball on the left wing and cut inside before beating England Under-17 goalkeeper Marcus Dewhurst from distance with a low shot into the bottom right corner.

The lead was soon doubled by the league leaders after Matthew Argent-Barnes hit the post, with the ball rebounding back to Birch, who was left with the simple task of lifting the ball over the diving keeper from point-blank range.

The home team continued to press and added a third before half-time after exploiting their aerial advantage once again. Dewhurst made a stunning save to deny the initial header, only for Birch to poke the ball home in a crowded penalty area for his second of the game.

Nicky Spooner’s side maintained their dominance after the break and were unfortunate not to widen the margin as they struck the woodwork for a third occasion, this time from Navarro’s curling effort from outside the area.

The Blades were unable to withstand the pressure and were undone yet again after Birch’s clever flick teed up Navarro, who made no mistake in bending his finish into the top corner.

United had a late opportunity to reduce the arrears when Reon Potts was sent through on goal, but he was thwarted by keeper Callum James to preserve his clean sheet.

“Today was an excellent performance, we dominated the game,” Wanderers Under-18s coach Spooner told LFE. “We had been working on direct runs and getting players forward more and being more direct in the final third, so it was nice to see it come all together.

“It’s not about the league table, it’s about the development of the boys, but it is pleasing to win because it keeps the momentum going and keeps the boys competing for places.”

Meanwhile, Blades Under-18 manager Derek Geary said: “At this stage of the season, we’re a bit stretched for players and we mostly Under-16s and one Under-15, so it’s always going to be tough, especially against a Bolton team who are really good, physical and can move the ball well.

“It was always going to be a tough day at the office but I think the lads will learn from it. We’re giving them these experiences now so hopefully it will give them a head-start for next season.”