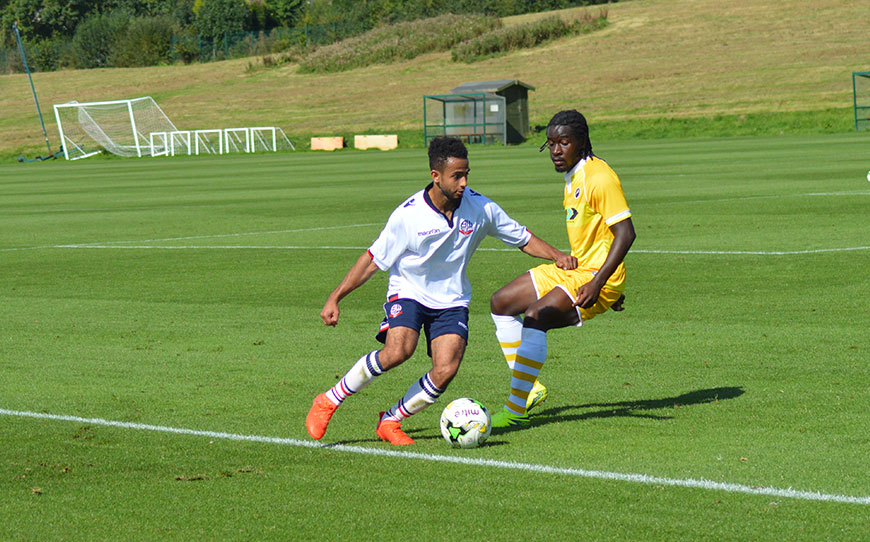 By Owen Keighley: Bolton Wanderers Under-18’s continued their promising start to the season with a 2-1 win against Millwall Under-18’s on Saturday.

A late Matt Fearnley penalty nine minutes from time meant the Trotters remain unbeaten in the Professional Development League – moving up to third.

The visitors started the game brightly and went close to opening the scoring after 20 minutes when Noel Leighton’s close range strike was brilliantly saved by Jake Turner.

Midway through the first half the home side broke the deadlock.

A fantastic diagonal pass by Jack Everest found Ryan White on the edge of the box, and he made no mistake as he smashed his shot in off the underside of the bar.

Like the first half, Millwall started the second as the better of the two sides, and had a chance to equalise when Lewis White fired his shot over the bar after a good run.

In the 52nd minute The Lions found an equaliser. A poor clearance from the Bolton goalkeeper fell at the feet of Lewis White and he expertly chipped the ball from 25 yards out into the empty net.

With nine minutes left and a draw looking like the outcome, Bolton were awarded a penalty when the referee spotted an infringement at a corner. And it was Fearnley who stepped up and sent Sam Jackson the wrong way to restore the home side’s lead.

Fearnley almost made it three when he found space on the edge of the box but his shot flashed past the post.

Bolton managed to close the game out and maintain their excellent start to the season.

Bolton coach, Nicky Spooner, said: “First half we played really well, we played through our centre backs and through the midfield and the boys deservedly went 1-0 up.

“It’s youth team football, so it’s about development, but you enjoy going on a winning streak and we’re following in the footsteps of the first team.

“It’s a good group of boys, we’ve got a first team manager who plays them – two have gone with the first team today and four are with the Under-23’s on Monday night so it’s really good.”

??“First half I thought we were good, we created chances but we couldn’t take them and we conceded a sloppy goal, which is always disappointing,” said the former Tottenham defender.

“I thought the second half was really even, we got the equaliser and a draw looked like the outcome but unfortunately the referee has seen something from the corner and awarded a penalty.

“ We’ve got an Under-16’s centre-back, Rob Strachan, who I thought was outstanding. And I thought Danny McNamara was excellent too.

“We’re disappointed to travel all this way to lose the way we did, but we put in a strong performance today.”