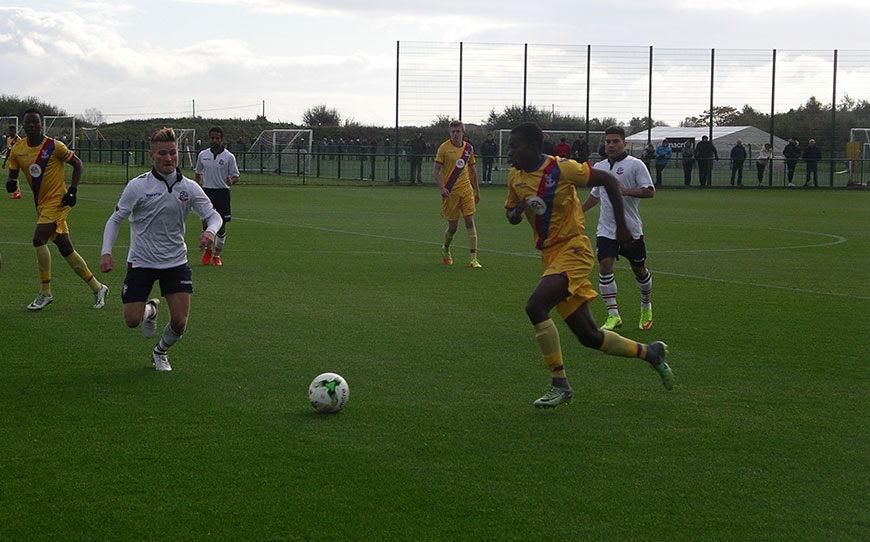 By Michael O’Gara*: Bolton Wanderers U18s got back to winning ways with a 2-0 victory over Crystal Palace on Saturday morning at the Eddie Davies Football Academy.

Bolton took control from the off with the highly rated Samizadeh almost scoring in the opening moments. Nicky Spooner’s team continued to ramp up the pressure on the Palace backline and after earlier hitting the woodwork, finally took the lead mid-way through the first half.

Samizadeh, flicked the ball over his marker and when Palace keeper Colm McAdden parried the ball, it fell into the path of fellow forward Everest, who headed home the rebound.

“It was pleasing for Jack. He’s had to play at full-back because of injuries” said Wanderers U18 coach Spooner.

“In the first half I thought he showed great energy on and off the ball.

“We’ve been encouraging the boys to forward run and it basically came from his (Everest’s) willingness to do just that.”

Palace toiled to break down the Wanderers defence and when they did, the found goalkeeper Jake Turner in fine form.

“The goalkeeper (Turner) was outstanding today. He pulled three or four great saves off,“ Spooner continued.

“We’ve been letting in too many easy goals and we’ve worked on it a lot.”

In truth Palace could have levelled matters just after the interval but Levi Lumeka, unmarked at a corner failed to control his shot which flew over the bar.

Bolton thought they had extended their lead at the start of the second half via the penalty spot after Palace had been penalised for shirt pulling at a corner.

Captain Harry Brockbank converted the penalty, but was ordered to retake it after encroachment from the home players.

The goal capped a great performance from the Iranian, who Spooner spoke glowingly about, at the final whistle.

“Alex has been training with the Under-23s, he’s come back and he’s like a can of pop, you give it a shake and you don’t know what you’ll get,” he said.

‘He’s always a threat in the final third. It was a very pleasing performance after the disappointment last week.

“We asked the boys for a reaction (after losing at Bristol City) and they played some very good stuff.”