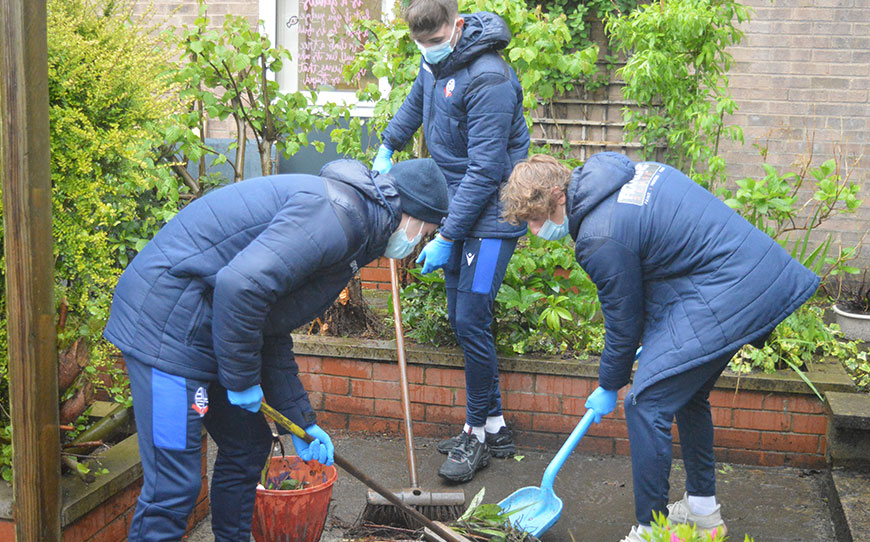 Bolton Wanderers first-year apprentices had the opportunity to hone their communication skills while helping the local area by assisting pupils with revamping a garden on the grounds of Sharples School.

In conjunction with the club’s Community Trust, the social action project will go towards their Sporting Excellence Professional (SEP) qualification, which is specifically designed for young footballers to develop attributes that directly transfer onto the pitch.

Alex Norwood, Head of Academy Education, told LFE: “One of the SEP units looks at personal and professional communication and part of that is public appearances, so this will be able to generate some good evidence for them and hopefully it’s a valuable learning experience.

“Obviously, communication is a key aspect to an event like this, but above all, I think it’s important for them to gain knowledge of what their role is as players, and that they are seen as role models.

“It’s really important for the boys to have an idea of the work that the Community Trust do, and also for them to realise that they can make a positive impact just by sacrificing a bit of their time.

“The lads have been signing autographs and having photos taken; they’ve represented the club brilliantly. Ultimately, they want to be professional footballers and this sort of activity, where they’re interacting with students, just gives them a taste of what life could be like and the commitments that will be asked of them.”

Each player will be able to use the community activity as evidence for their SEP portfolio, while they will also talk about the experience during a professional interview towards the end of the qualification.

Aside from their academic commitments, however, some are now keen to continue making an impact in the local area during their spare time.

“This is one of the first community events we’ve been able to attend and I think we should do more because it’s good for us to develop important skills and it’s good for them as well,” said midfielder Arran Pettifer.

“It’s good to give back and give the young lads something that they can get excited about and I think we’ve gained a lot from being around them as well. They seem to have really enjoyed it and obviously it’s nice for them to see some of the players from their club.

“I’ve been at Bolton for 11 years, so it’s nice to now be representing the club in the community. You never know when it’s going to end, so it’s important to try and make an impact before it’s too late.”

Seventeen-year-old Max Conway added: “I’m proud to be a Bolton player because we’ve got a great community. Seeing the smiles on people’s faces when we walked in was great to see and it’s a good indication of what life as a footballer can be like.

“All the different elements of the SEP qualification help us to learn a lot of personal skills that will prepare us for life after the apprenticeship. With these sorts of events, teamwork is a key factor because we’re helping each other get the job done to the best of our ability, so we can also translate certain experiences onto the pitch.”

This feature is included in Issue 42 of LFE’s Touchline magazine.