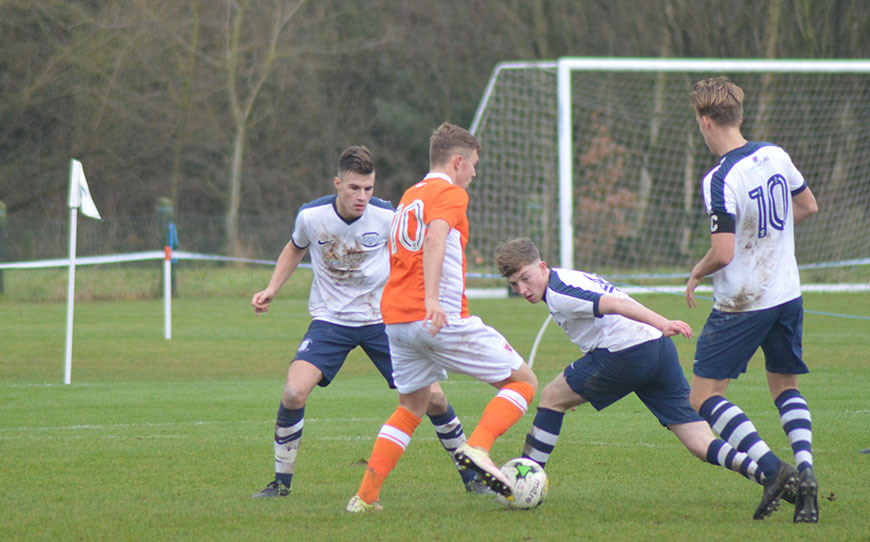 The Seasiders started the game brightly and took the lead after 13 minutes when Jack Newton glanced home a Roache free-kick from the left.

The away side almost doubled their lead when a Will Dunne header was superbly saved by Callum Roberts in the Preston goal.

The home side finished the half strongly and equalised after 37 minutes when Mike Howard found time and space in the box and he made no mistake by burying his shot past Jack Sims.

On the stroke of half-time, Preston had a glorious chance to take the lead when Josh Earl’s cross found Harry Garstang in the box, his powerful strike seemed destined to hit the back of the net but his effort was superbly saved by Sims.

Preston did, however, take the lead five minutes in to the second half when Howard’s cross was met by Kian Smart at the back post.

Roache then had a great chance to equalise on 57 minutes when he turned his man in the box but his shot was straight at Roberts.A minute later, though, Blackpool were level. Ralph Chea was fouled in the box and Roache stepped up to dispatch the spot-kick.

Both teams went forward in search of a winner and Blackpool found it, via Roache. One-on-one with Roberts, the forward smashed his shot past the goalkeeper to spark wild celebrations on the side-line.

North End could’ve grabbed a leveller at the death but Tom Barry was unable to connect from close range after a set-piece.

“We’ve spoken to their staff after the game and I think we both agreed it could’ve gone for either team at the end.”

“We passed the ball quite well and opened them up. We shifted the ball about and got good balls into the box that we should have scored from. We created lots of chances and we scored twice but we actually had easier ones that missed.

“So I was pleased with how we played when we got the ball. That said we shouldn’t have to score four or five goals to win a game, two should be enough.”

Blackpool coach, Ciaran Donnelly, was delighted with the result that kept his team in the hunt for top spot in the North West Youth Alliance:

“These are the days where we try and teach the lads what it’s like to play Blackpool v Preston, they’re not all local lads, the rivalry doesn’t run as deep as the first team,” Donnelly told LFE.

“They need to learn that this game is all about getting a result and what it means to us at this club, at any level.

“If I was a spectator I wouldn’t be asking for my money back because it certainly was an entertaining game. Overall I thought we were the better team second half, we looked in control and looked like the only team who would go on and win it.”