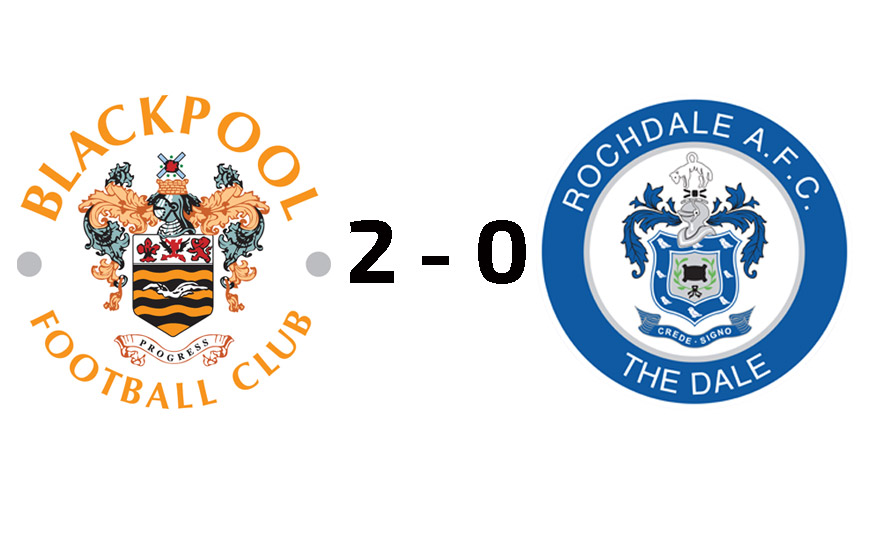 By Owen Keighley: A goal in each half ensured that Blackpool overcame Rochdale and in the process climbed to the top of the North West Youth Alliance, on Saturday morning.

On a sun kissed Lancashire day Ciaran Donnelly’s side maintained their unbeaten start to the campaign and now head the table on goal difference from Walsall, Accrington and Port Vale.

Finn Sinclair-Smith and Rowan Roache twice went close to scoring for the Seasiders in the opening stages while Neil Kuemo went close for Dale.

Blackpool went ahead in the 28th minute. Roache, picked out Dylan Sumner from a corner, and the midfielder made no mistake with his header.

Just before the break, Blackpool almost made it two after great link-up play between Roache and Jack Newton saw the Republic of Ireland forward break through on goal, but he scuffed his shot wide.

After the break, Rochdale applied some pressure on Blackpool’s defence and should’ve equalised.

A loose pass by a Blackpool defender sae Kuemo run unopposed towards the Blackpool goal, but Jack Sims pulled off a great save to deny the Rochdale striker.

Both sides then created chances that should’ve troubled the scoreboard. Will Dunne blazed over the bar from six yards out for the home side and substitute Dan Piggott’s shot was superbly tipped over by the impressive Sims.

Donnelly’s team though “put the game to bed” 11 minutes from time. A fantastic cross by Roache found substitute Tyler Rufus, who guided the ball into the top corner.

“First half I thought we were excellent,” Blackpool coach Ciaran Donnelly told LFE.

“I thought our two full-backs were terrific getting forward and making good decisions in the final third. Rochdale had a good go at us, I said to their coach that it’s probably our toughest game so far this season.

??“It was a tough game second half, but Rowan (Roache) put in a great cross for Tyler (Rufus) to head home to put the game to bed.

“It’s a performance game, of course we look at the league table, we want to win the league and be successful but it’s about me going to the manager and telling him we’ve got players who are potentially good enough to play for the first team, and at the moment, it looks like we’ve got plenty of them.”

Dale coach Chris Brown conceded that it would be “back to the drawing board” this week after watching his team lose their second game this term.

“The first six games have been really good, we’ve had some good results but the performances were good too but last week and this week, some negativity has grown into the group, so we’re going to manage that,” Brown said.

“Our subs both made a difference, Joe Piggott hasn’t played in 10 weeks – that’s through injury and growth – but he’s got great quality and had some good opportunities to score.

“And Danny (Adshead) is only Under 15’s, so we put him on just to get some creativity because I think we was lacking that in the late stages of the second half, but they both made a difference.

“We will see how the boys are Monday morning, we will have a normal week and hopefully get back to how we were playing a couple of weeks ago.”