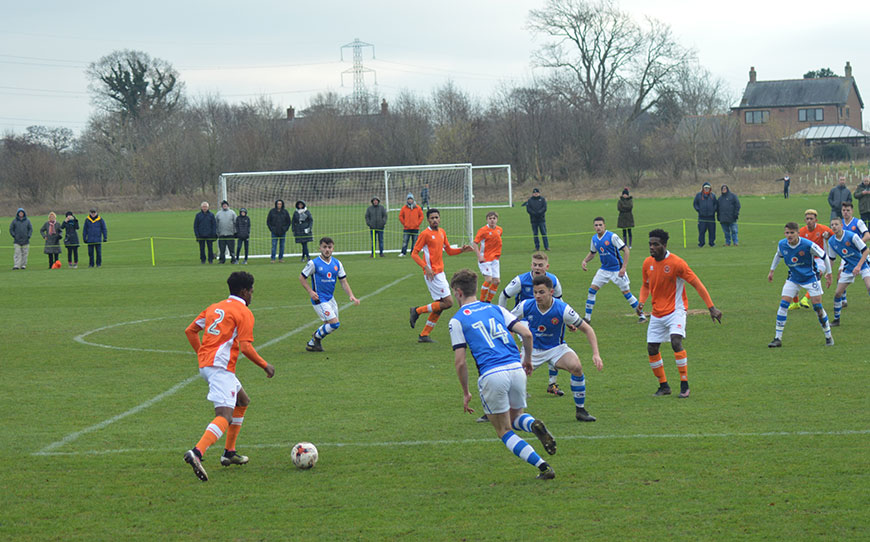 By Owen Keighley:Jack Sims came to the rescue for Blackpool’s U18s on Saturday saving a second half penalty from Cameron Peters to ensure his side stayed at the top of the North West Youth Alliance.

Sims’ moment of brilliance ensured the top two could not be separated with the game ending in a 0-0 draw.

In an extremely tight affair the first major opportunity fell to Walsall. Ethan Freemantle found space on the right and flashed a shot inches wide of the goal after 13 minutes.

Six minutes later, Blackpool’s Finlay Sinclair-Smith found space down the left before whipping in a dangerous cross for Tyler Rufus but he headed wide.

Rufus had another chance on 33 minutes when he turned and found space inside the Walsall penalty area but his shot was well saved by goalkeeper Brandon Ganley.

The best chance of the game came two minutes into the second half when Walsall won a penalty. Saddlers striker Peters stepped up to take the spot-kick but Sims produced a brilliant double save to deny the penalty and block the rebound to keep the scores level.

Both teams cancelled one another out thereafter, with the only noteworthy moment coming via Blackpool’s Caleb Richards, who fired over from 30 yards.

“To come to Blackpool, get a 0-0 after two and a half hours in a minibus is very pleasing.” Biggs said.

“We missed a penalty in the second half and Blackpool had a scramble which they could’ve scored from, so overall it was a good spectacle for under-18’s football.

“I thought the whole of the back four were excellent today, I’d also like a special mention for Ashley Maddocks, it’s his first game back for 6 weeks, he played out of position today and he was outstanding in all aspects for me today.”

Blackpool U18s Manager, Ciaran Donnelly added:
“The game panned out pretty much as we expected it to.” Said Donnelly

“I said to Jack (Sims) that he would be needed today. He’s been excellent all season as he was needed today with a penalty save and a great save to deny the rebound.”

“Overall we played well, but we didn’t have enough quality in the final third.”

“Were still top of the league and two points clear, so it’s a good result for us.”