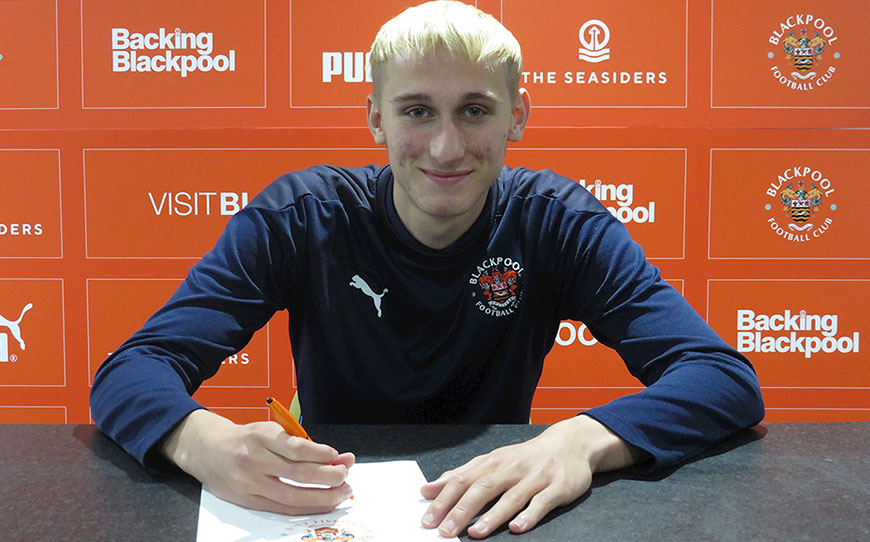 Blackpool teenager Ewan Bange marked his 19th birthday with a professional contract, agreeing an 18-month deal with the option of a further year.

Since breaking into the youth team setup as a 15-year-old, Bange has been a consistent performer for the Under-18s and earned his senior debut in the EFL Trophy against Carlisle United in October 2019.

A third-year scholar prior to signing this deal, the highly-rated forward has scored 13 goals so far this season, including three hat-tricks, with his most recent coming away at Oldham Athletic earlier this month.

Bange told the club website: “It means a lot to me and my family. I’ve been here for 11 years now and I’ve been working towards this day since then. I can only thank my family and the staff for helping me to get here. The hard work starts now.

“I know it’s a big step up, but I’m willing to put the work in to get to that level. Hopefully I can help the team out in the future.”

Ciaran Donnelly, Academy Director, added: “It gives the academy a great deal of pride seeing Ewan sign his first professional contract with the club. Ewan joined the club as an eight-year-old and has progressed through the pathway over the last 11 years to this point.

“He is a unique player that has lots of potential and we are looking forward to seeing how he develops as he makes his first steps into senior football in the coming months.

“He has had a few opportunities to play and train with the first team and with careful nurturing, I am really hopeful that he can make that step into our first-team in the next couple of seasons.”