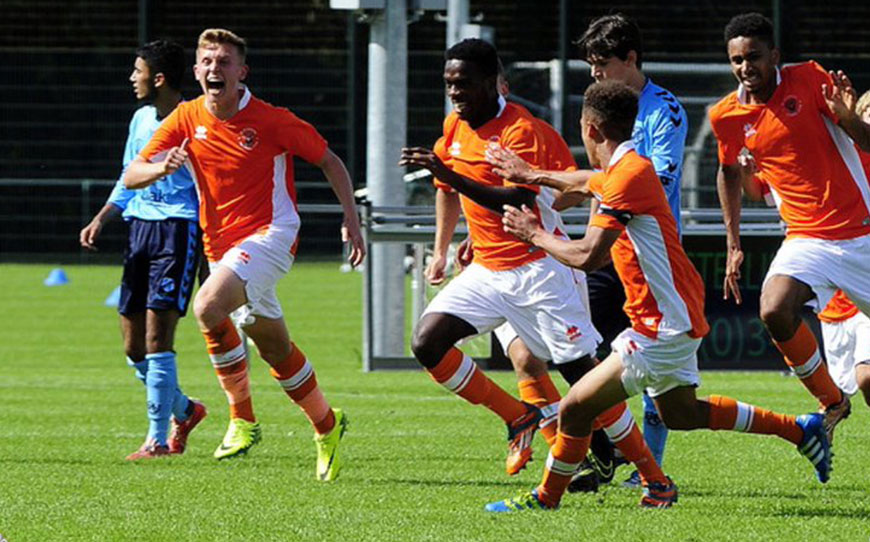 Ralph Chea scored a screamer with the last kick of the game to give Blackpool Under-18s a dramatic 1-0 win against Dutch side Utrecht.

After 90 minutes of stalemate, the substitute found the top corner with an ambitious strike from distance as the Seasiders claimed their first win of the tour.

There were two controversial moments in the first half as both sides were adamant they should have taken the lead.

First, Utrecht had a looping effort over keeper Jack Sims hit the crossbar, with the ball dropping down in front of the line, according to the officials.

Just moments later and Blackpool repeated the incident when Jack Newton’s header ricocheted around the area before Finlay Sinclair-Smith flicked the ball onto the bar, but appeals for a goal were again dismissed.

Rowan Roache blasted a strike from the edge of the area straight into the keeper’s hands, while Sinclair-Smith had another chance, but his curling effort whistled narrowly wide of the far post after cutting in from the left as Pool finished the half on top.

Utrecht failed to threaten the visitors in the final third, but despite the Tangerines looking more likely to open the scoring, they continued to be wasteful in front of goal.

Ciaran Donnelly’s side piled on the pressure in the latter stages and Ben Jacobson almost broke the deadlock with five minutes remaining when he threw his body at a bobbling ball from a corner, but he failed to get enough of a connection towards goal.

Will Dunne was then allowed a free header from another corner, but he also failed to hit the target.

And with the final whistle just seconds away, Chea received possession of the ball from 30 yards out and bent a shot with the outside of his right boot beyond the reach of the keeper and into the top corner of the goal to cue wild celebrations.