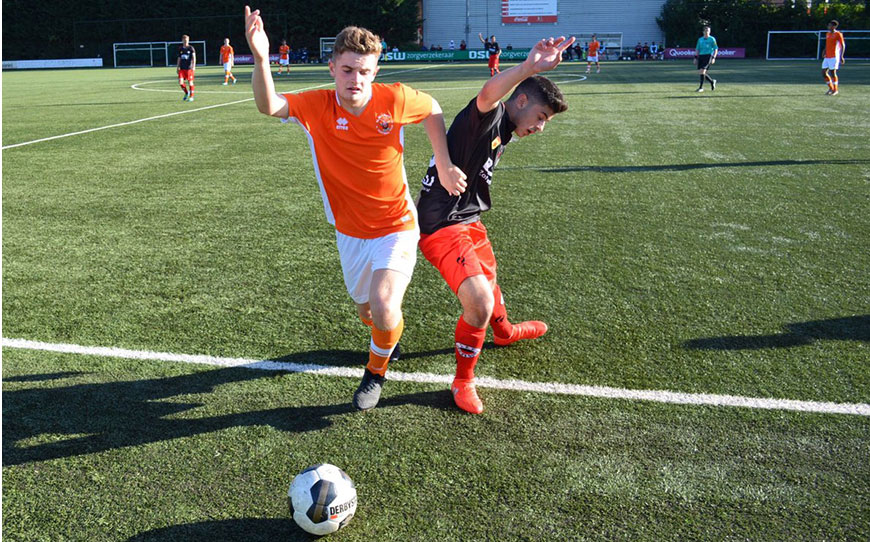 Blackpool Under-18s suffered a 2-0 defeat to Excelsior in the final game of their Dutch trip to end with a win, a draw and a loss from their three fixtures.

With Rowan Roache away on international duty and Finlay Sinclair-Smith sidelined with a back injury, the Seasiders lacked the attacking quality to get on the scoresheet as the Dutch side sealed a comfortable win.

The Tangerines had the better of the opening 20 minutes, but were not clinical enough as two good chances were wasted.

Ralph Chea, hero of the last gasp 1-0 win against FC Utrecht, missed the target with a header from 12 yards out after Dylan Sumner’s cross from the right.

Shortly after, Jack Steele struck a free-kick from the left side of the edge of the area, but an Excelsior defender headed the effort clear when it looked bound for the top right corner of the net.

But the Dutch side took charge of the game and tested Pool keeper Jack Sims on a number of occasions.

Sims tipped a free-kick from the edge of the area round the post, before palming the ball onto the crossbar and away to safety following a header from the resulting corner.

Just moments later, the Blackpool stopper was again called into action as the hosts broke clear in behind the defence, with the Excelsior winger unleashing a powerful strike towards the near post, which was well saved.

But the pressure finally paid off on the stroke of half-time when a quick free-kick created a shooting opportunity, which was parried by Sims into the path of Alwyn Flynn, who handled the bouncing ball to concede a soft penalty.

The spot kick was drilled into the bottom right corner to give the home team the advantage at the break.

After the restart, Blackpool showed more composure on the ball, but were unable to compete with the physical strength of the Excelsior side.

Right-back Jack Newton hit a cleanly-struck shot from distance that caused some concern to the keeper, but that was as good as the visitors could muster in the second half.

And with 20 minutes to play, the Dutch team killed off the game when a free-kick from the left side was taken precisely into the far top corner to secure the victory.