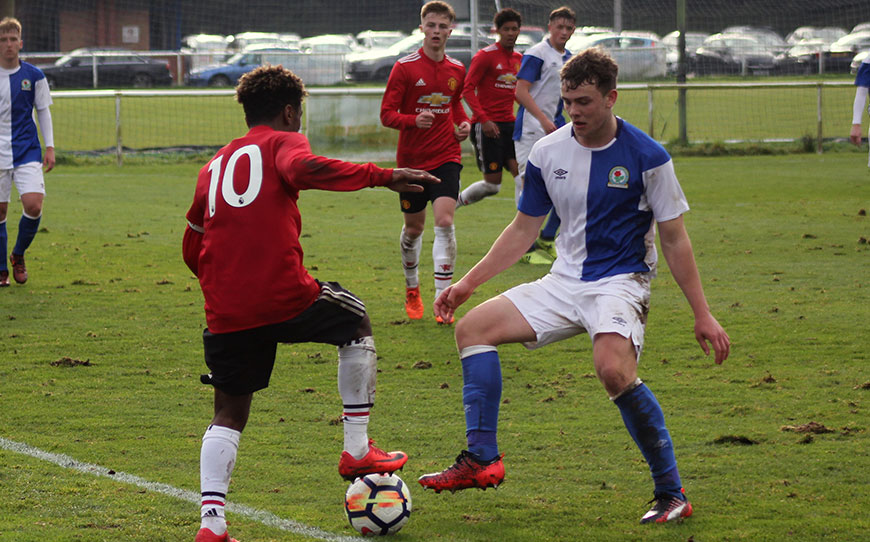 By Kane Brooker: Blackburn Rovers Under-18s forward Dan Butterworth grabbed a consolation strike as they were brushed aside by an impressive Manchester United to slump to a fourth successive defeat in the Premier League North.

United were inspired by Under-17 World Cup winner Angel Gomes as he scored twice on his return from international duty, while D’Mani Bughail-Mellor and a Hayden Carter own goal contributed to a convincing victory for the league leaders.

Gomes was the first player to test either keeper, forcing Matthew Campbell into a save from an early free-kick, but he could do nothing to prevent the midfielder from opening his account 10 minutes before half-time as he converted from an almost identical position to his earlier effort from 25 yards out.

Rovers created a couple of opportunities to equalise, with Butterworth striking a half-volley straight at United stopper Theo Richardson, while Lewis Thompson saw his shot blocked by defender Jake Barrett.

And the lead was doubled soon after the break in unfortunate circumstances for the hosts when James Garner’s strike from distance deflected off the back of Blackburn captain Carter to send the ball into the opposite corner, with Campbell colliding with the post and requiring a lengthy spell of treatment after making a desperate attempt to keep out the shot.

Richardson then produced a fingertip save to deny Thompson as Rovers pushed for a way back into the game, but their chances of a comeback were extinguished on 74 minutes following a third United goal.

The hosts could only stand and admire a slick team move from the Red Devils, which was expertly finished off by Gomes for his second of the afternoon, beating Campbell with a tidy finish into the bottom right corner.

The visitors extended the margin to four just moments later after George Tanner’s corner was mishit by Ethan Laird into the path of striker Bughail-Mellor, who duly dispatched from close range to make it 18 goals in four league matches for the Reds.

However, Rovers clawed a goal back with six minutes remaining when Butterworth found the bottom corner from inside the area, although it proved to be mere consolation as United secured their fourth win in a row.

United Under-18s coach Kieran McKenna told LFE: “Blackburn started quite well, but we came into it with a really good first goal and kicked on from there. We saw some really good football in the second half.”