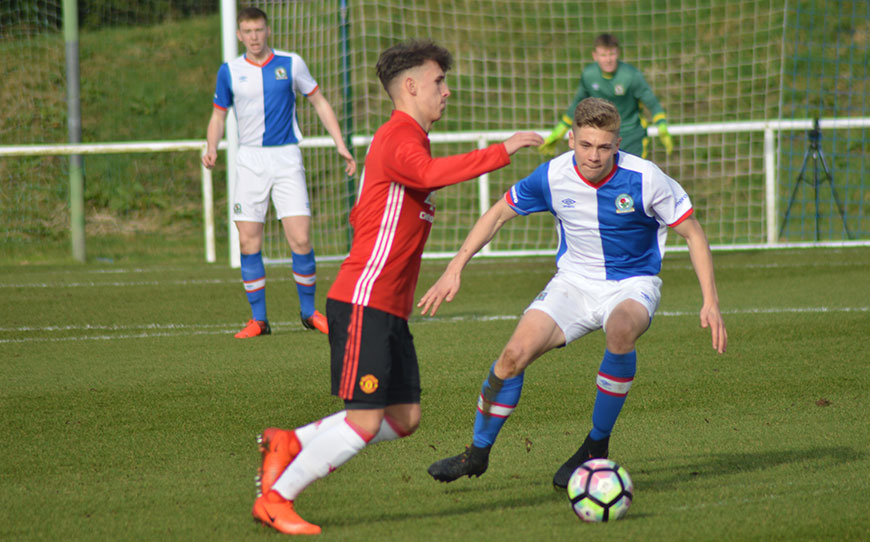 By Owen Keighley: Three goals in eight second half minutes earned Blackburn Rovers a memorable victory after coming back from 2-0 down to beat Manchester United 3-2 on Saturday morning.

In the penultimate fixture in the regional group phase of this season’s Under-18 Premier League before all the clubs from both divisions are merged together for the final stage, Blackburn almost took the lead in the ninth minute when Lewis Thompson rattled United’s crossbar with a stinging shot from the edge of the box from a well-worked corner.

Blackburn went close again on 23 minutes with a strike from Frank Jones that also hit the frame of Alex Fojtíček’s goal.The best chance, however, fell to the visitor’s after 37 minutes when winger Joshua Bohui found himself with a clear goal scoring opportunity inside Blackburn’s box but effort was superbly saved by Rovers keeper Ben Ascroft to keep the tie scoreless.

United started the second half brightly and took the lead eight minutes after the restart. Ethan Hamilton won the ball and unleased a shot from 30 yards that arrowed into the top corner – giving Ascroft no chance.

The away side look to be heading for all 3 points on 66 minutes when Aidan Barlow added a second goal with another illuminating shot from the edge of the penalty area.

That goal seemed to sting Rovers into retaliation and they took the game by the scruff of the neck to score three times in an eight-minute spell.

Lewis Thompson grabbed the first goal on 68 minutes. A fine run was supplemented by a little bit of good luck as the ball fell back into the left-back’s path and he dispatched a shot into the top corner.

Four minutes later, Joel Steer sent Alex Curran on his way and the substitute calmly rolled the ball past Fojtíček. The urgency and belief of the hosts was evident as Curran sprinted to pick the ball out of the net to get the game restarted as quickly as possible.

Rovers completed their comeback in the 76th minute when United defender Jake Kenyon was shown a straight red card for stopping a goal-bound header with his hand. Brad Lynch made no mistake with the penalty that followed, blasting the ball down the middle to ensure Rovers claimed all three points.

“Once the first goal went in, great, then Alex (Curran) got the equaliser. Don’t know if you saw his reaction, but it wasn’t to celebrate it was to get the back out of the net because he had the belief that we could go on and win it.

“A lot of the lads have moved onto the U23’s, Dan (Butterworth) did well yesterday – scoring two against Newcastle, Stefan (Mols) was one of the best players on the pitch yesterday and that’s what it’s all about.

“It’s great to beat Man United but it’s about how many players we can get into the first team and we’ve had six debuts this season as an Academy, so that’s the most important thing.”

The result confirmed that Rovers, who are now level on points with second placed United and Liverpool, will participate alongside the best performing Under-18 side in the Premier League’s competition as the season draws to a conclusion.