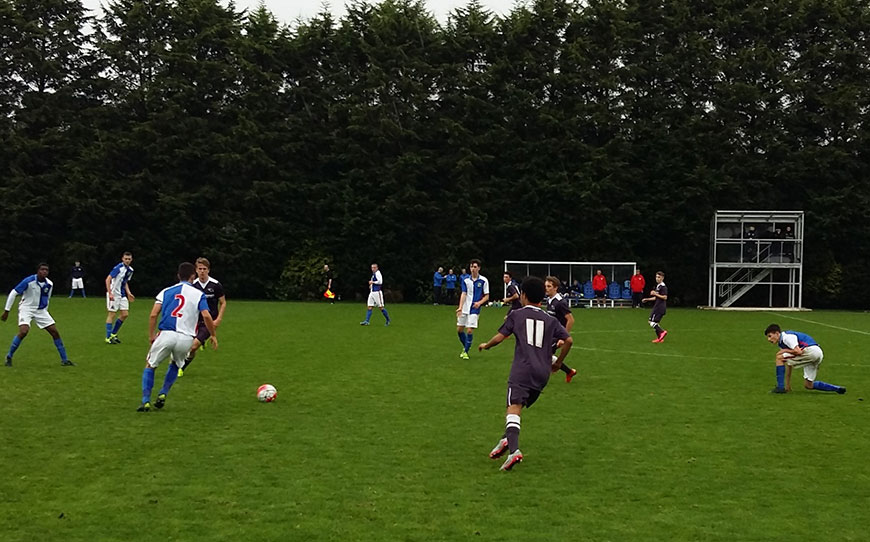 By Tom Daniels: Blackburn Rovers Under-18s claimed their first win in four games as they edged past Derby County 3-2 on a rainy Saturday morning at Brockhall.

Joe Rankin-Costello bagged a brace for Rovers and while Emil Jakobsen and Alex Clover replied for the Rams, Tre Pemberton settled matters in favour of the Lancastrians.

Derby had started on the front foot. Jakobsen saw his 18th minute effort well saved by Andrew Fisher in the Blackburn goal.

The Danish forward was not to be denied though and blasted home moments later after a slick pass by James Carvell.

Blackburn levelled seven minutes later. John Buckley, promoted from the Under-16s, crossed the ball allowing Rankin-Costello to make the score 1-1 after the keeper failed to collect the ball.

The second-half proved to be just as exciting as the first and within a minute of the restart Rovers took the lead.

Rankin-Costello, stepped out of defence and glided past several Derby players before curling his shit beyond the reach of keeper Matt Yates to take his goal tally to four for the season.

Rovers looked to stretch their advantage as half-time sub Joel Steer saw a close-range header kept out but when Alex Clover climbed the highest to head in a well taken free-kick, the game was once again all square.

However Blackburn were not to be denied and when Steer’s cross found Pemberton, he applied the finish 12 minutes from time.

”I think the result… may have flattered us in terms of the possession from Derby,” said Blackburn coach Ian Jones.

“On the whole I thought we did pretty well.

“Difficult conditions for both teams. We had some good spells and probably didn’t take enough of the opportunities that came our way and ultimately got punished for not defending a couple of crosses.”