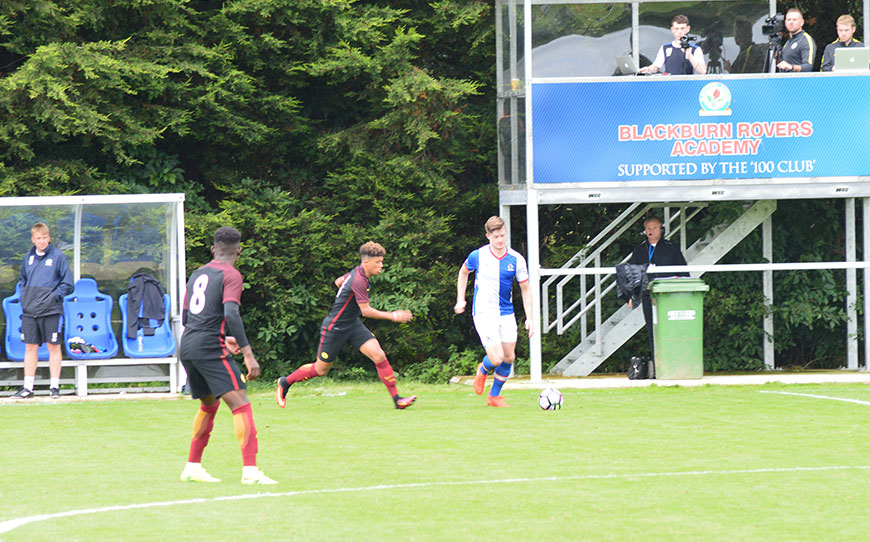 By Owen Keighley: Blackburn Rovers Under-18s gained a deserved 1-1 draw against Manchester City Under-18s on Saturday at Brockhall but were left frustrated that they had not taken all three points after missing a first half penalty and hitting the woodwork in added time.

The visit of City, who thrashed Liverpool 7-0 the week before, focussed the minds of Rovers young players though they were fortunate not to fall behind within five minutes when Tyreke Wilson rattled the crossbar from the left.

The hosts grew into the game though and Brad Lynch should have opened the scoring after 20 minutes. A low cross from Andrew Jackson found the number 10 on the penalty spot, but he sliced his shot wide.

Moments later, Blackburn were awarded a penalty. A bursting run by Stefan Mols saw him fouled in the box, but Joe Grayson’s penalty was well saved by Swiss youth international Arijanet Muric.

The home side finally managed to break the deadlock midway through the first half though. Lynch pounced on a mistake in the City defence and his pass slipped Dan Butterworth through on goal.

Mancunian, Butterworth, who joined Rovers from Manchester United at the end of last season made no mistake with his finish, blasting unerringly into the roof of the net to give his team a deserved lead.

City though pegged Blackburn back just before the interval. Great play by England International Jadon Sancho on the left allowed Dele-Bashiru to stroke the ball into the far corner from around 18-yards out..

The visitors started the second half brightly and went close when former Lorenzo Gonzalez, a summer signing from Servette tested Ben Ascroft after being teed up by Luke Bolton.

Blues defender Ash Kigbu then headed wide when unmarked in the penalty area at a corner kick as they looked to press home their dominance. Rovers rallied though. Tre Pemberton burst through the City defence but couldn’t quite direct his shot on target.

Minutes later, Butterworth cleverly made room for himself in the City penalty area but his shot was comfortably saved by Arijanet. Rovers almost won the game in stoppage time when Butterworth again beat his man and crossed for Pemberton. The winger’s shot agonisingly hit the outside of the post though and with that the result was confirmed.

“Obviously Man City are absolutely top draw and we’ve gone toe-to-toe with them today and fully deserved the draw.

“Both sides had chances, if I’m being slightly biased, yeah we should’ve won but it was still a great performance by us.

“Everybody looked at the game today to see where we are – City are well out in front of everybody else at the moment but that performance can only give our lads the belief that it’s going to be a good season for us.”

Former Rovers star, Jason Wilcox who now heads-up City’s Academy said his team responded well to the pressure placed on them by their opponents after half time.

“The response in the second half was great, we competed a lot better and I thought we worked a lot harder.” Wilcox said.

“We kept plugging away and we were a little bit unfortunate at times – we created a lot of chances but we didn’t quite have the run of the green in the final third.I thought it was an extremely competitive game, I thought Blackburn defended extremely well.

“Great credit to Blackburn for that, and well done to them because it was a really competitive game in the second half – and that’s what we want.”