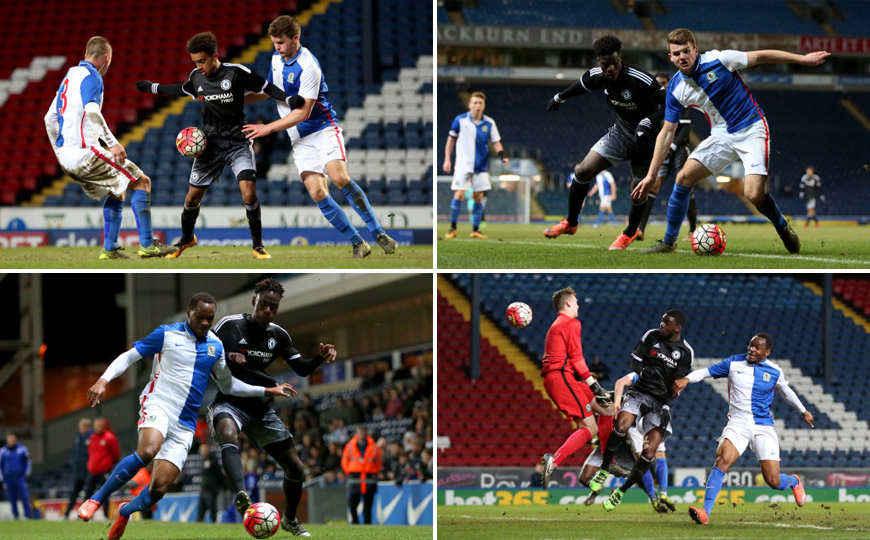 Chelsea Under-18s edged closer to a fifth successive Youth Cup final after a narrow 1-0 first leg win against Blackburn Rovers in front of over 1000 fans at Ewood Park on Friday night.

Fikayo Tomori’s first-half header proved the difference between the two sides, with the holders now favourites to progress into the final, when the two sides meet again at Stamford Bridge on Friday 8 April.

Both sides struggled to make an impression on the game early on as the hosts negated the threat of the potent Chelsea attack that has bagged an impressive haul of 71 goals in 25 league games this season.

The opening 25 minutes provided very little in goalmouth action, with 16-year-old Dujon Sterling causing concern to the Blackburn defence, but without an end product. And it took a set piece to break the deadlock.

Rovers keeper Andy Fisher was caught in no man’s land following an Isaac Christie-Davies free-kick from the left and Blues defender Tomori evaded his marker at the near post before powering a header into the back of the net to give Chelsea the advantage.

“To be honest, we’ve been quite poor from those kinds of areas this season,” Chelsea Under-18 manager Joe Edwards said. “We’ve spoken to Isaac that the ball doesn’t always need as much pace on it as people think. If you just get it in and around that area in front of the goalkeeper it’s a nightmare to defend against.”

“We’ve obviously watched Blackburn throughout the competition, so we knew they would be quite physical, in our faces and a difficult team to play against.”

Edwards’ side gained control of proceedings having taken the lead as but despite dominating possession they struggled to create any notable chances before half-time.

It was more of the same after the restart though the visitors were left cursing their luck when England Under-19 striker Tammy Abraham, who has scored 17 goals in 24 appearances in all competitions, struck the woodwork with a free-kick from the edge of the area.

But the away side were unable to stretch the gap and Rovers pressed for an equaliser in the latter stages of the game. Lewis Mansell was played in behind the last line of defence and carried the ball into the area, but goalscorer Tomori cleared Mansell’s effort off the line.

Chelsea keeper Nathan Baxter was called into action from the rebound and was equal to the task as he parried substitute Tre Pemberton’s driven shot away from danger. That proved to be the best opening for Billy Barr’s youngsters, who now have it all to do progress to the final.

“I was disappointed with the first half,” the Blackburn Under-18 boss said. “We started okay but Chelsea got a foothold in the game and forced us to change our shape. At half-time, we had a few things to say to them but they have come out and reacted to it positively.”

“The second half was more like it, so I’m disappointed but delighted in different ways with a 1-0 result. We are still in the tie and we can take it down there and give it a right good go.”

“We can look forward to the next three weeks before we go there. We’ll work on it, come up with a game plan and hopefully come back with a positive result.”