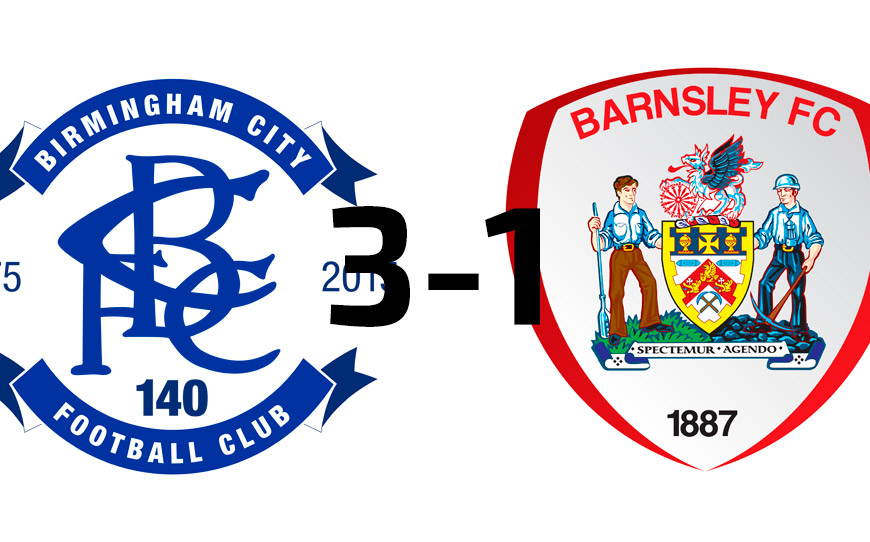 By Jack Furness: A late goal from in-form Ronan Hale sealed a 3-1 home win for Birmingham City U18s against Barnsley to keep them in touch with pace-setters Nottingham Forest in the Professional Development League (North).

The Blues sit four points behind the league leaders after edging this closely contested affair in blustery conditions at their Wast Hills training ground.

Only two players remained in the Blues starting line up from the 11 who impressively beat Southampton in the FA Youth Cup on Thursday night, while Barnsley named a more familiar starting 11.

Birmingham development coach Steve Spooner hailed his team’s performance after the game. He said: “The weather was an issue, the wind kept changing direction so given all of them circumstances I was very pleased with the performance.

“Boys have come in who haven’t really played and kept up the standard of the ones who started Thursday. We are absolutely delighted that they’ve sustained that level of performance.”

The first real clear chance fell to bottom of the league Barnsley on 18 minutes. Captain Lewis Wardle made a surging run out of defence after a Blues corner was cleared. He fed Komal Palmer out wide who slid it back into his path and shot wide not troubling Leighton Smith in the home goal.

Despite the loss, Barnsley development coach Chris Howarth saluted Wardle’s standout performance; “He’s only a first year, but he’s trained with the first team, the potential is there definitely,” Howarth said.

“We’ve just got to be patient with him, we’ve got to make sure he develops how he is now and keep him positive.”

Blues took the lead on 30 minutes. Defender Matty Timms fed the ball to Chris Paul who opened up his body in the box and played in attacking midfielder Nosa Iyamu who somehow managed to slot the ball past Walton and three defenders on the line.

Barnsley equalised in similar fashion mid-way through the second half. A flick on from a corner wasn’t gathered by Blues ‘keeper Smith and Palmer was on hand to flick the ball beyond several defenders.

Birmingham restored their advantage almost immediately. Midfielder, Paul swung a ball into the area and Josh Martin guided a header past Jack Walton.

Hale was introduced a couple of minutes later and it didn’t take him long to influence the game.

A ball over the top of the defence to fellow substitute Beryly Lubala was cleared by Walton on the edge of his area, it fell to Hale who looped a shot over the head of Barnsley defender Philroy Peters into the unguarded net to make it 3-1, and notch his eighth goal in as many games.

This was Birmingham’s third league win on the spin and the defeat leaves Barnsley further adrift at the bottom going into the Christmas break.