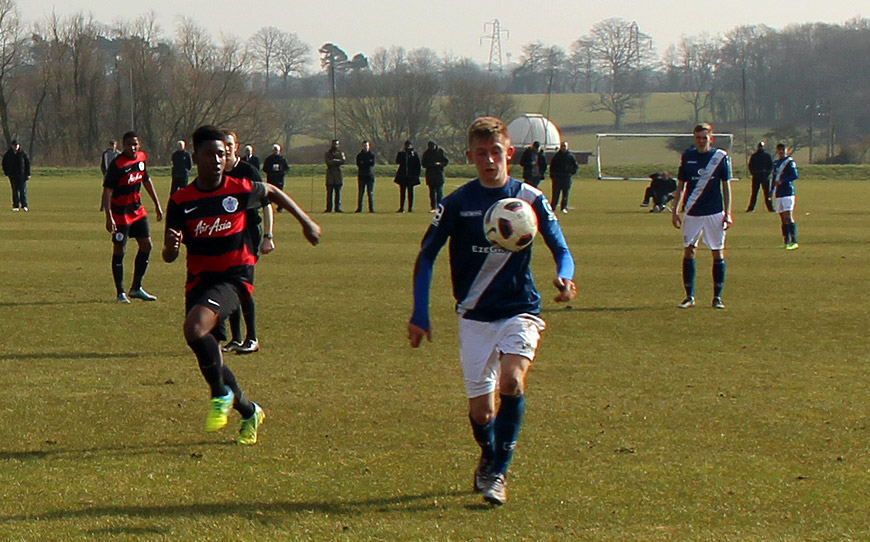 Beardmore was given his marching orders for handling the ball outside the penalty area to leave the Blues in the unenviable position of being a man down for 75 minutes. Ultimately it proved an impossible assignment with Josh Bowler scoring a brace for the visitors.

With no chances of note in the opening exchanges, the first major moment of the game and the one that would define the outcome arrived in the 15th minute when Rangers forward Jardell Adeyinka raced towards the Birmingham area. Goalkeeper Beardmore came out, Adeyinka took a shot and Beardmore blocked it with his arms.

Referee Ricky Brookes brandished an immediate red card and Under-15 goalkeeper Lewis Landers was summoned from the substitutes bench with Cameron Ebbutt being the man sacrificed.

Birmingham City development coach Steve Spooner was disappointed with the sending off. He said: “It was from their corner that we ended up with our goalkeeper getting sent off, so something isn’t right there which is disappointing.”

“In the eyes of the law it is a sending off and sometimes at this level you get refs who are sympathetic to them learning their trade but there’s no better way of learning than the hard way and if that’s what it takes for him [Beardmore] it’ll be a lesson well learned.”

Birmingham’s resilience only lasted a further 17 minutes. Wide-man Bowler picked up the ball on the right side of the Birmingham area and ran across the edge of the box before blasting a powerful left-footed shot into the bottom corner of the goal.

Despite being a man down, Birmingham kept themselves in the game. David Popa provided an outlet and gave the Rangers defence a headache or two, drawing a number of fouls.

Birmingham then had a huge penalty shout waved away by the referee a minute after the interval. Odin Bailey appeared to be clipped in the area by Jeremy Arthur but the referee waved play on.

The Blues replacement goalkeeper Landers made a string of saves to deny the visitors. His 52nd minute save from Gianni Crichlow in particular caught the eye.

However he was unable to prevent a second Rangers goal on 65 minutes. Bowler ran towards goal and in a carbon copy of his first, hit a left-footed strike past Landers into the back of the net.

QPR Under-18s manager Paul Furlong credited Birmingham for their performance and conceded that he had some sympathy for Spooner and his team.

“I had a word with the boys and I think the score line flattered us today against a very good Birmingham side,” he said. “The goalkeeper gets sent-off and I know in the Football League it’s a sending off but at the level that we’re at its all about development and I would have liked him to stay on the pitch for it to be eleven versus eleven.”

“I was always expecting a tough game against Birmingham today and had there been eleven men on the pitch it might have been that but even with ten men they still created chances.”