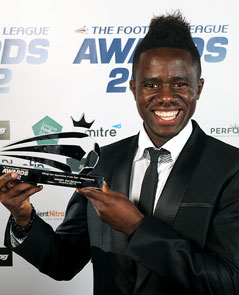 Coventry City’s Gael Bigirimana has been named the Kitbag.com Apprentice of the Year for the Championship at the Football League Awards 2012.

Bigirimana beat two other shortlisted Championship players to the Award, Jonathan Williams of Crystal Palace and Jordan Obita of Reading.

Gael joined Coventry City as a 12 year old having shown persistence until they gave him a trial.

The midfielder made his first team debut at the start of the season, and has taken it in his stride to become a cult figure among the Coventry City fans.

Off the pitch he is on track to achieve his educational targets, having undertaken additional sessions because of his first team commitments.

On winning his award, Bigirimana said: “It means the world to me and brings confidence and desire to achieve more in the game.”

“I need to thank the Academy staff at Coventry and my team-mates for making me the player that I am today. I would of course like to thank the gaffer for giving me 21 first-team appearances at the age of 17.”

Other notable winners on the night included Southampton’s Rickie Lambert, who walked away with the npower Championship Player of the Year Award.